The diminutive carved figure at the top of the wooden stopper for this gourd, a mwana hiti, represents clan ancestors. The elaborate, bifurcated hairstyle and breasts exhibit characteristics linked to idealized womanhood and fertility. The seated pose may reference a ceremony in which a young graduate sits on an ancestral stool as a symbolic link to her matrilineal heritage, and thereby becomes mwali ya kiti, “the initiate of the stool” (Jahn 1994, 83). With symbolism that is meaningful for both ritual and everyday use, these sculptural forms ultimately celebrate the “ability and desire to bear children” (Mshana 2013, 141) and thereby carry forward one’s lineage.

The symbolic act of sitting upon a ceremonial chair or throne, a marker of authority or representative of clan histories, is sacred among many of the closely related cultures of the central coastal region of Tanzania, including the Zaramo, Kwere, Doe, Kaguru, Luguru, Gogo, and Nyamwezi peoples (Van Wyk 2013, 70–71; Nooter 2001, 70–71). Even the figural gourds are sometimes enthroned, placed atop the stools or high-backed chairs that symbolize clan unity, and are considered to be among the most important types of objects produced in this region (Van Wyk 2013, 70). Gourds are widely identified with fertility and also rainmaking practices in East Africa. Their figure 8 shape is cultivated with a cinch around the fruit’s midsection during the growth of the plant (Felix 1990, 238). In coastal areas and the central highlands of Tanzania, a gourd placed upon a carved chair or throne functions varyingly as an ancestral witness during important ceremonies, as a symbol of power or fertility, or as a vehicle to divine rain (Van Wyk 2013, 31, 67, 72).

The gourd in the Palmer collection is just one example from a large suite of carved objects that, topped with mwana hiti figures, embody sacred properties for the Kwere, the Zaramo, and others with similar cultural practices in Tanzania. An exquisitely carved Zaramo zither with the mwana hiti finial from the Smithsonian National Museum of African Art collection (2015-4-17) is featured in the African Brilliance exhibition.

In addition to figural medicine stoppers, gourds are further ornamented and activated with beads, feathers, hair, and other implements as part of rainmaking and fertility ceremonies and rituals. This container may have been used by a diviner or healer for the storage of herbal extracts, powders, paints, and other forms of medicine. The carved head is a removable stopper with a longer coned portion hidden inside. Such stoppers are used throughout eastern Africa to dispense, extract, or apply substances, and their sculptural forms are often customized to reflect an individual patron or purpose (Dewey 2009, 232). As part of traditional healing arts, ritual specialists activate such containers and similar objects, harnessing ancestor and spirit forces in order to counteract individual or community maladies. 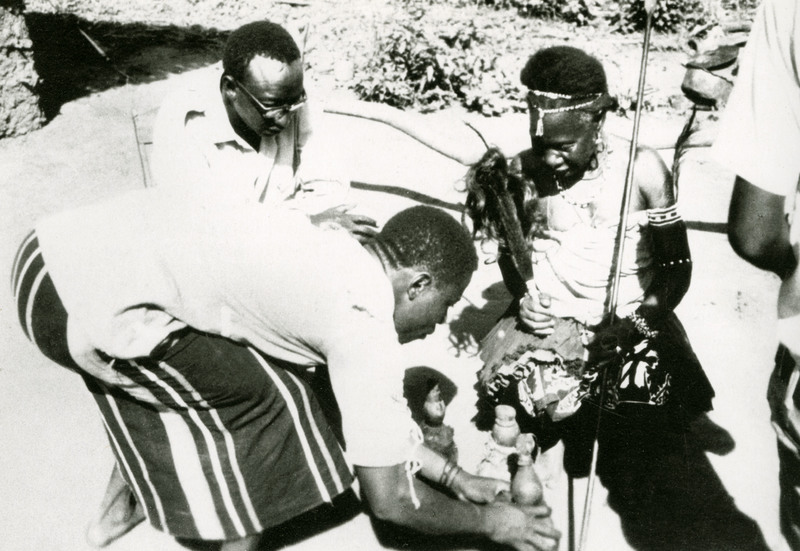 Attendant to a female titleholder displaying gourds while she explains them to translator Eddy Mgobo, Bagamoyo district, 1974. 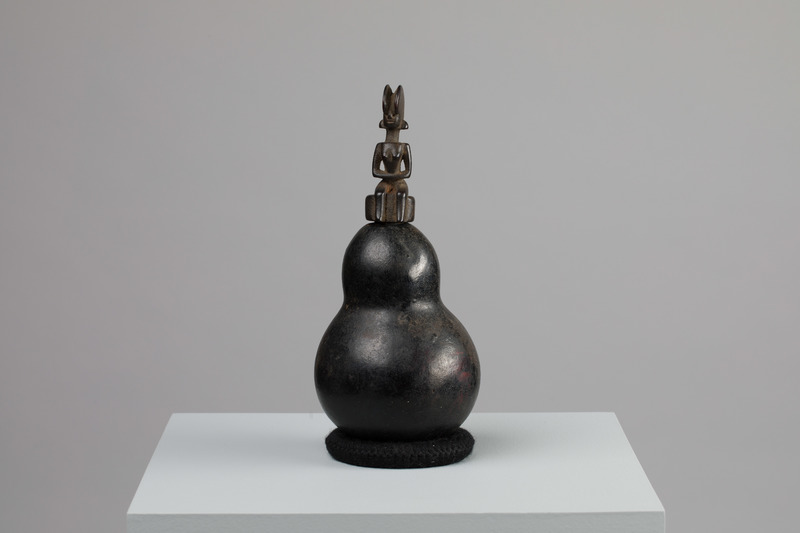 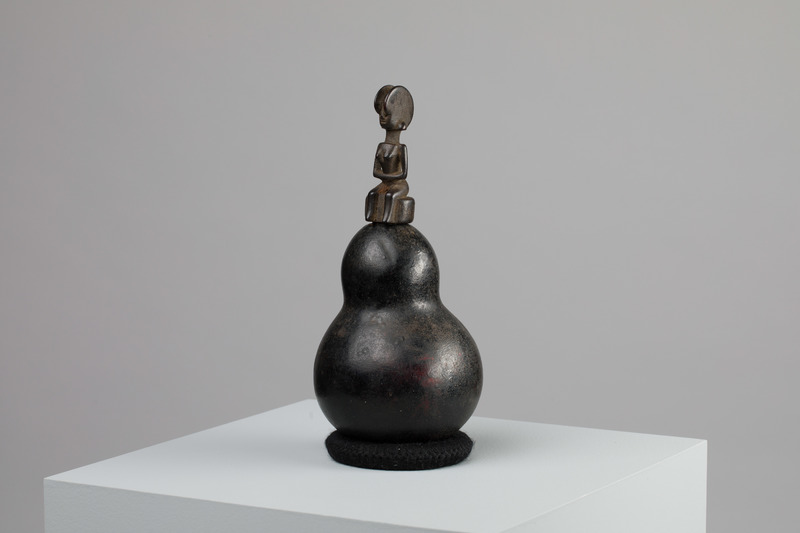 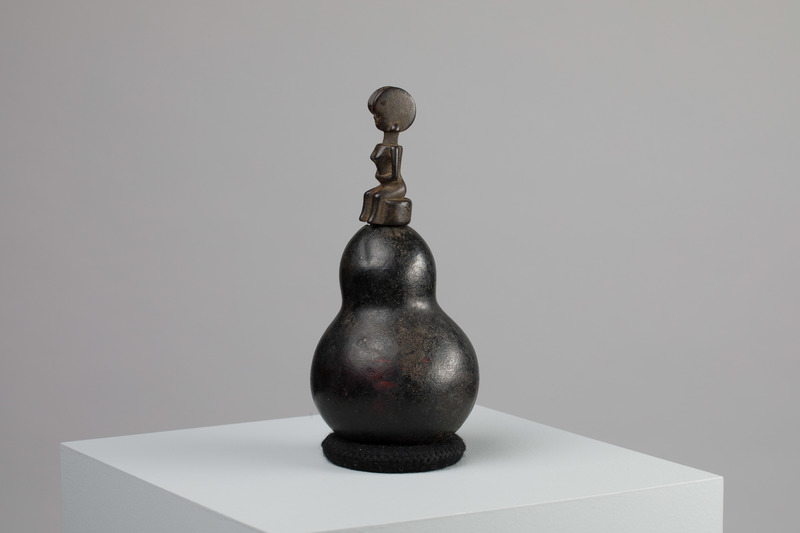 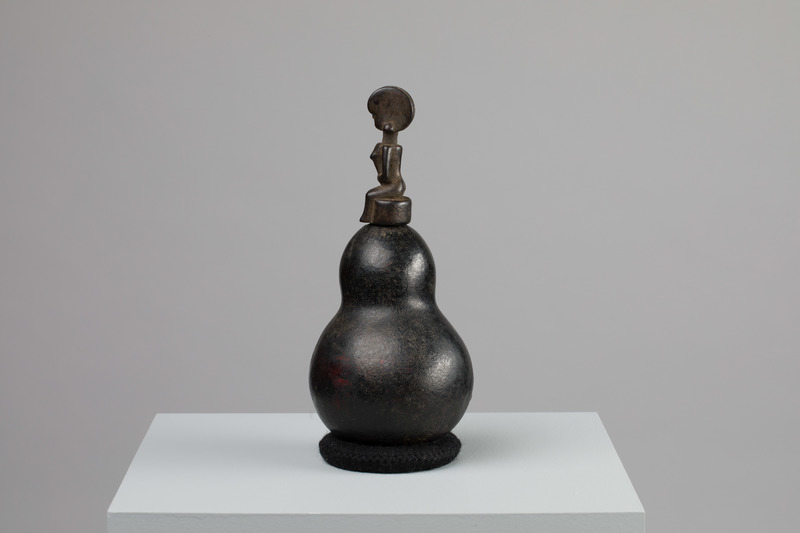 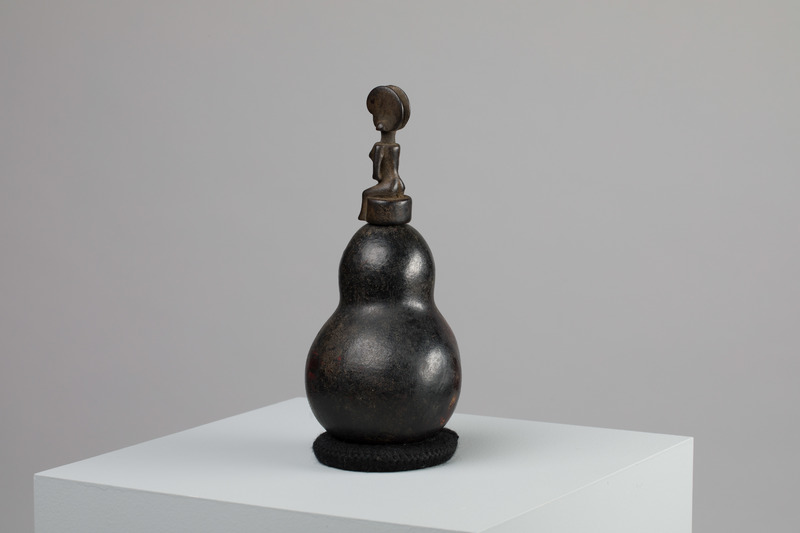 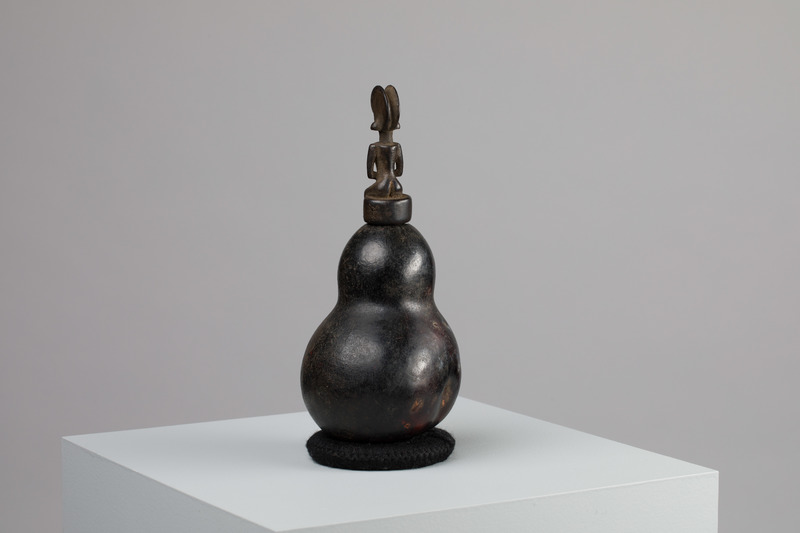 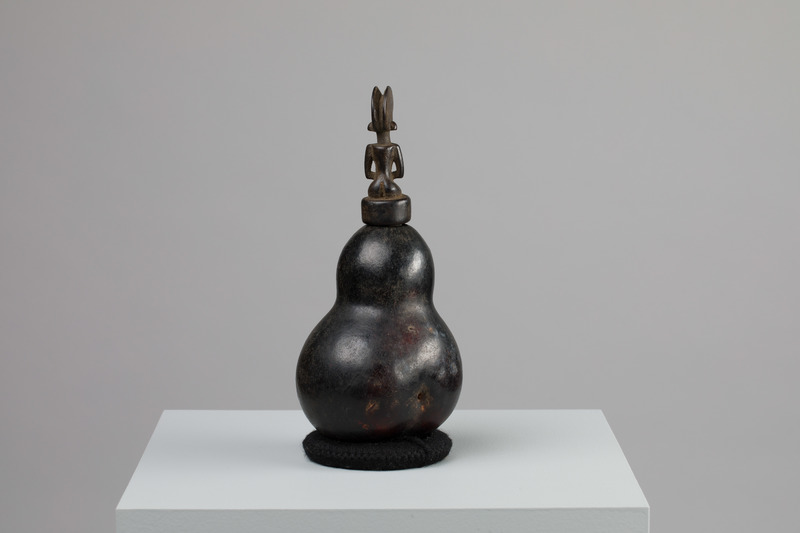 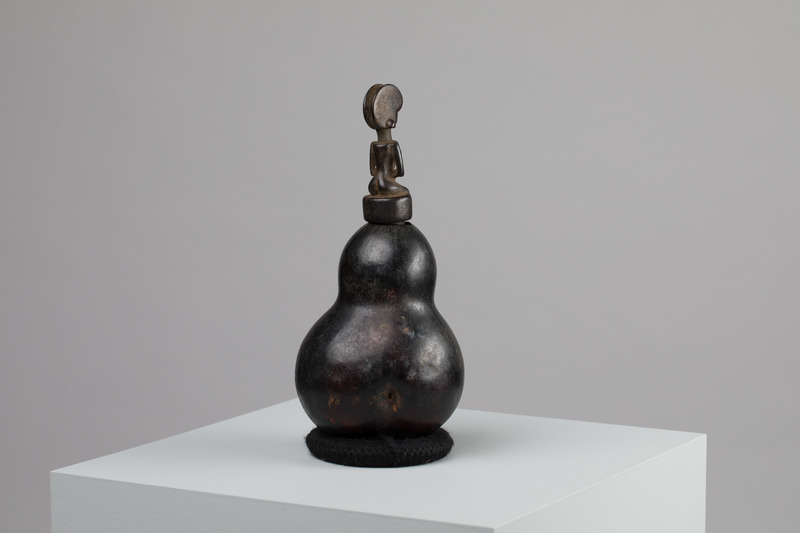 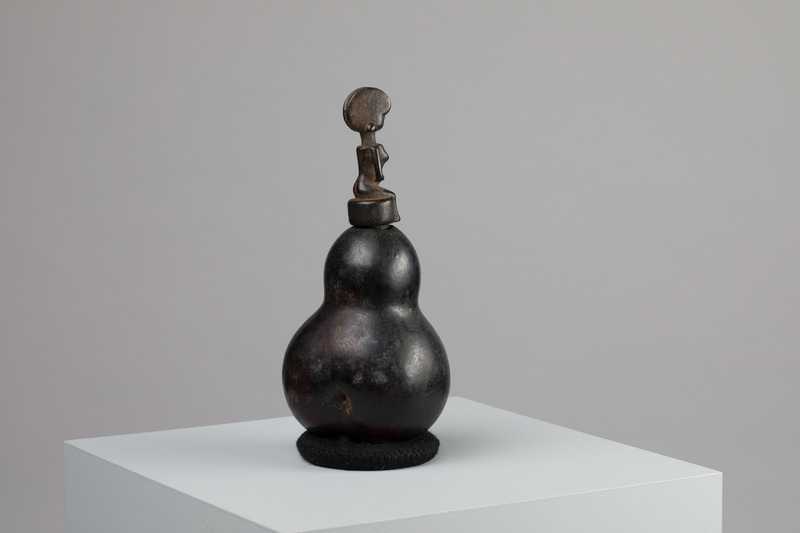 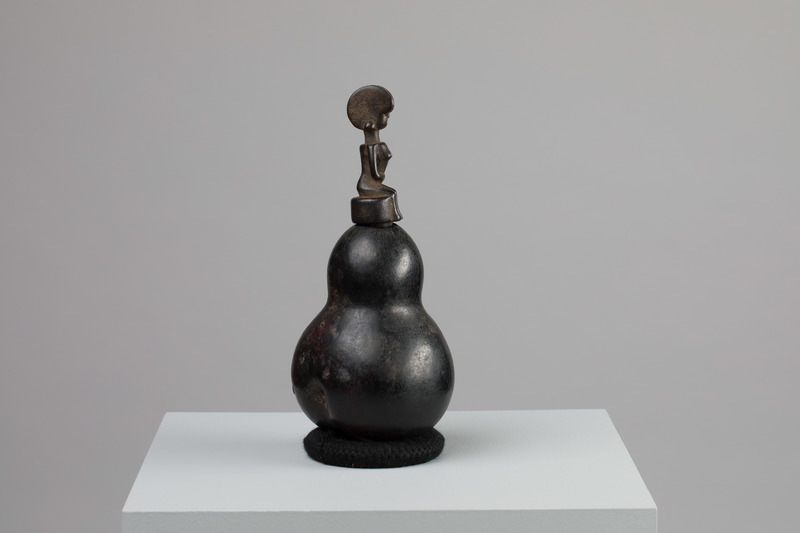 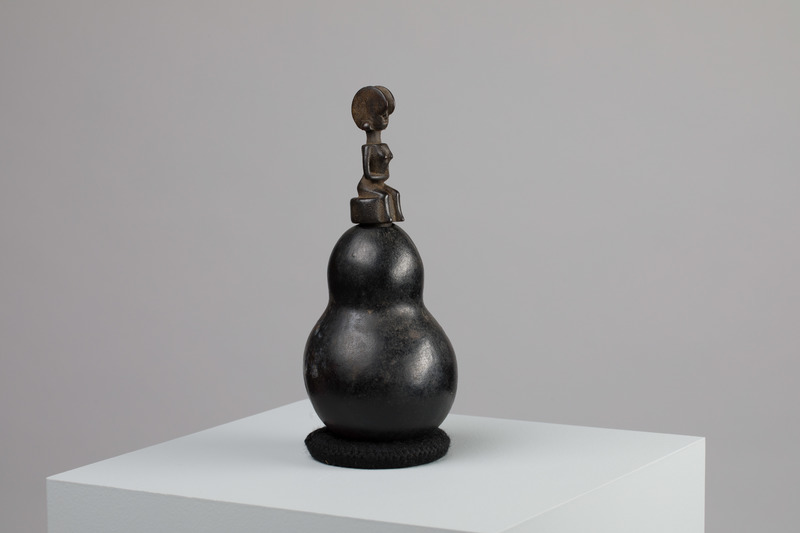 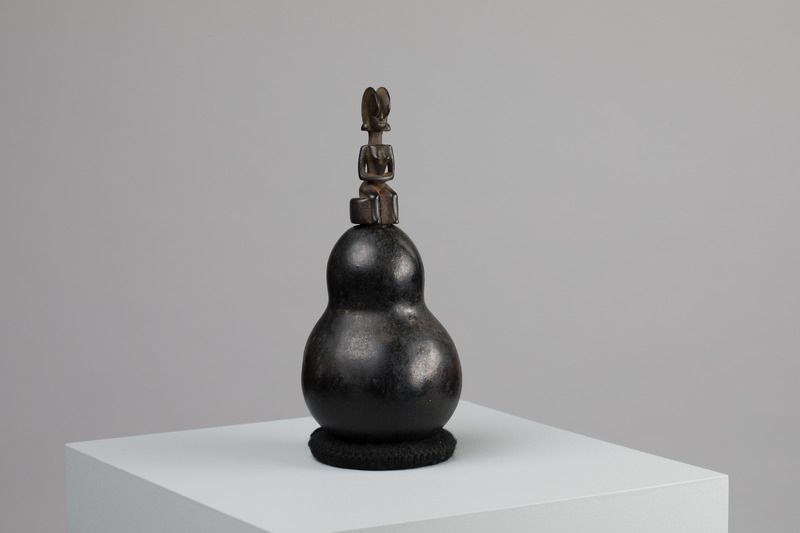 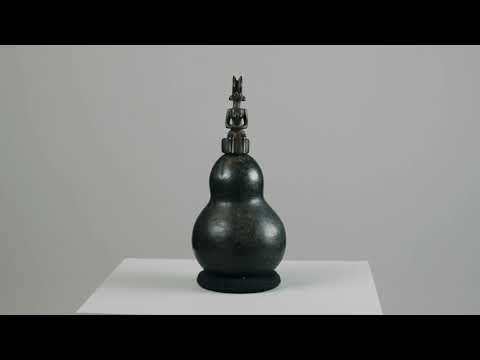 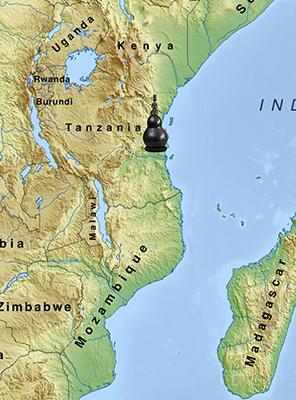