This trough zither is an exquisitely carved example of the typical Zaramo instrument form. The strings, no longer present, would have been made from animal gut and pulled through the six holes at the upper and lower edges of the frame. The long, gently curved trough portion is a flat soundboard with concave walls on all four sides. The back of the trough is sometimes attached to a large, dried and hollowed round calabash, which serves as resonating chamber. An example of a similar zither attached to the calabash is illustrated in the collection of Marc Felix, although in his 2001 publication he labels it as a zeze (Felix 2001, 20–21). That instrument, also used throughout East Africa, is based on Southeast Asian zither forms and typically has a bar neck more like a banjo or fiddle, with no trough.

As in most parts of the world, music is an important part of celebrations, ceremonies, festivals, and special ritual events for the Zaramo people and their closely related neighboring groups. Musical instruments played on such occasions—especially those adorned with elaborate decorative elements or a carved human figure—are valued for their aesthetics and sounds, and are additionally appreciated as historical objects that represent cultural traditions and sentiments (Nketia 1989, 21). The cinched waist, flared skirt, and stacked cylinders that narrow to a smaller point on this carved figure evoke movement, as in dancing or twirling, and also reference the figural stoppers that are frequently used to seal bottles or medicine containers.

The geometric surface designs of long, wavy zigzags, punched circles, and abstracted crosses with rotated triangular forms are typical of Swahili coast woodcarving. Their application on this instrument reflects the Zaramo artistic exchange with the Swahili as well as the Mijikenda of the south Kenya coast, who decorate their memorial posts with similarly styled chip carvings and surface patterns (Nooter 2001, 70). Such geometric surface designs adorn a wide range of carved objects throughout East Africa. Their transmission and innovation across diverse mediums reflect the artistic and cultural exchanges that have been a part of Indian Ocean–inland trading systems and social networks for centuries.

The diminutive carved figure at the top of the zither, in the form of a mwana hiti stopper, represents clan ancestors. The elaborate, bifurcated hairstyle, breasts, and navel exhibit characteristics linked to idealized womanhood and fertility. The larger trunk sculptures on which this form is based—standing figures that typically range from 5 to 20 cm in height—function primarily as ritual objects or teaching tools for girls’ initiation practices. However, symbolism that also combines male and female traits is meaningful for both ritual and everyday use. These sculptural forms ultimately celebrate the “ability and desire to bear children” (Mshana 2013, 141) and to carry forward clan lineage. Mwana hiti figures are attached as finials to a variety of objects that serve both utilitarian and ritual functions. In addition to musical instruments, these include hairpins and combs; lidded containers that hold gunpowder, snuff, and paint; flywhisks and staffs; beds, chairs, and stools; and terra-cotta bowls and gourds connected to water pipes; or stoppers for medicine containers (Jahn 1994, 120–40; Felix 1990, 420). 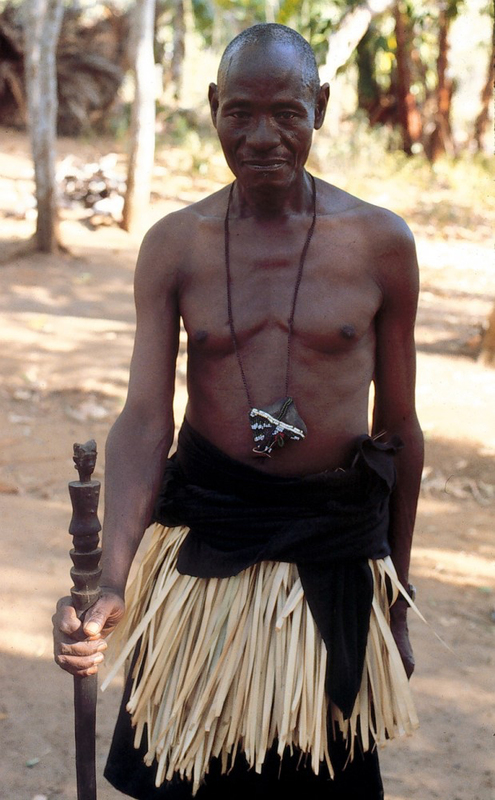 Athumani Jaswa Moto holds a staff that he carries as an emblem of authority. 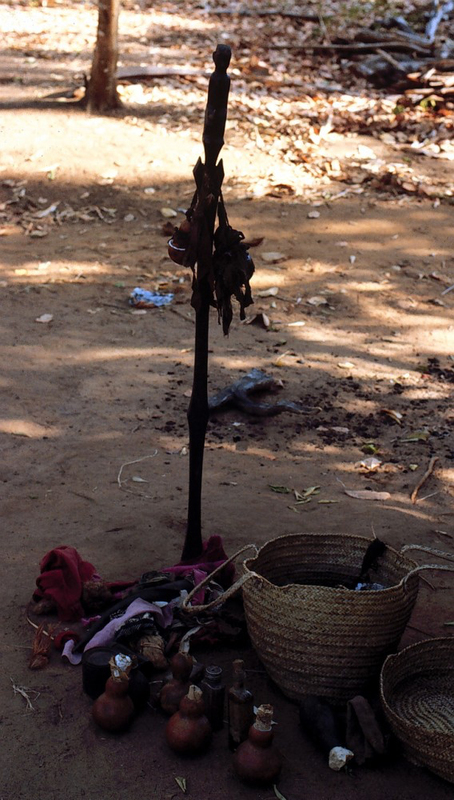 A staff and other healing paraphernalia owned by the Zaramo mganga, Athumani Moto.