Lipiko helmet masks—as in these two examples— are danced in masquerades by the Makonde of northeastern Mozambique. The term mapiko (sing., pl. lipiko) in the Shimakonde language refers to both the mask itself and the performance. Until very recently such masks were produced and danced only by men. Mapiko performances are historically rooted in spiritual knowledge and traditional masculine activities, including initiations and secret rituals, but continue to shift and develop in new public inventions that reflect political, cosmopolitan, and modern expressions of power, cultural richness, and diversity (Bortolot 2007, 10-11).

The Makonde are considered to have one of the richest carving traditions in East Africa. There are two major styles of masks for which they are best known: this naturalistic style of helmet masks from Mozambique, and the more abstracted masks carved by the Makonde of Tanzania, which cover only the face (Coote 1989, 13; Roy 1985, 194). The helmet style fits over the upper part of the performer’s head; he sees through the opening for the mouth. The utilitarian nature of the objects, typically carved from soft, lightweight wood (ntene or njala), took priority over considerations of durability and preservation (Coote 1989, 15; Bortolot 2007, 11).

Mapiko masks may represent animal characters or caricatures of government officials, but most often depict Makonde men and women. They are colored with pigments ranging from browns and blacks to reds and yellows, and decorated with human hair or animal fur as well as recognizable cultural adornments, including pointed teeth, libretto lip plugs, and facial tattoos (Bortolot 2007, 12). Body decorations of the Makonde, especially tattooing or scarification and chipped, pointed incisors, are varyingly linked to initiation rites and bravery; beauty and identity; declarations and representations of an elevation in social status, power or rank; healing medicine; or a way to mark prisoners and slaves (Schneider 1972, 26–28, 30). The graphic and linear tattoo decorations on the masks were historically attached as appliquéd strips of blackened wax, but more recently are painted or incised into the wood (Bortolot 2007, 12).

The lighter mask in the Palmer collection has distinctive characteristics that indicate it may have been made between the late 1930s and the mid-1950s. Those years represent the height of popularity for mapiko walikuti, highly choreographed masquerades composed of complex movements and constructions from which many performers draw their dance style today. On these greatly admired and abstracted masks, the wide diamond-shaped mouth is “formed by the convergence of triangular lips,” the lines and angles of facial tattoos are “exuberantly explored,” and hair attachments are “geometric compositions” that include arabesque shapes, as seen here (Bortolot 2007, 15). The more distinctly and naturally formed nose and mouth and the lack of facial tattoos on the darker mask in the Palmer collection indicate that it was most likely carved later for a different style of performance. 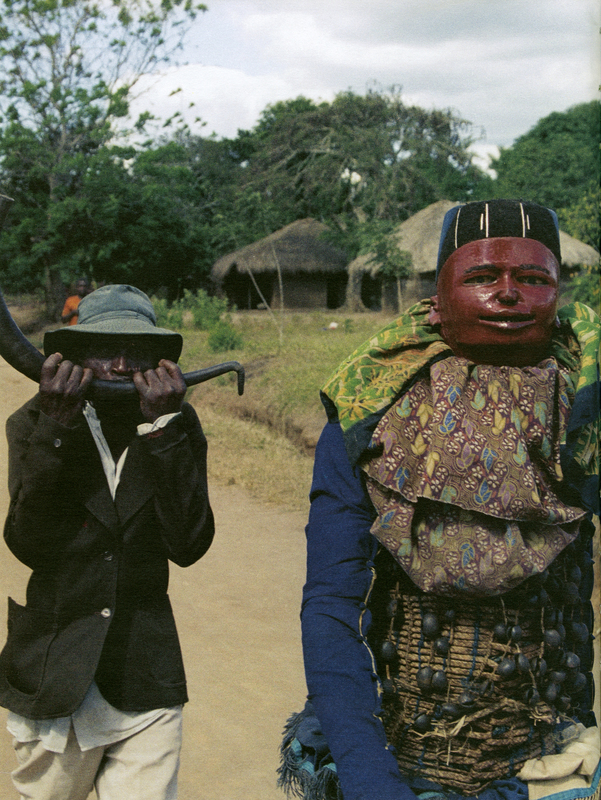 Mapiko dancer entering a village accompanied by a lipalipanda player. 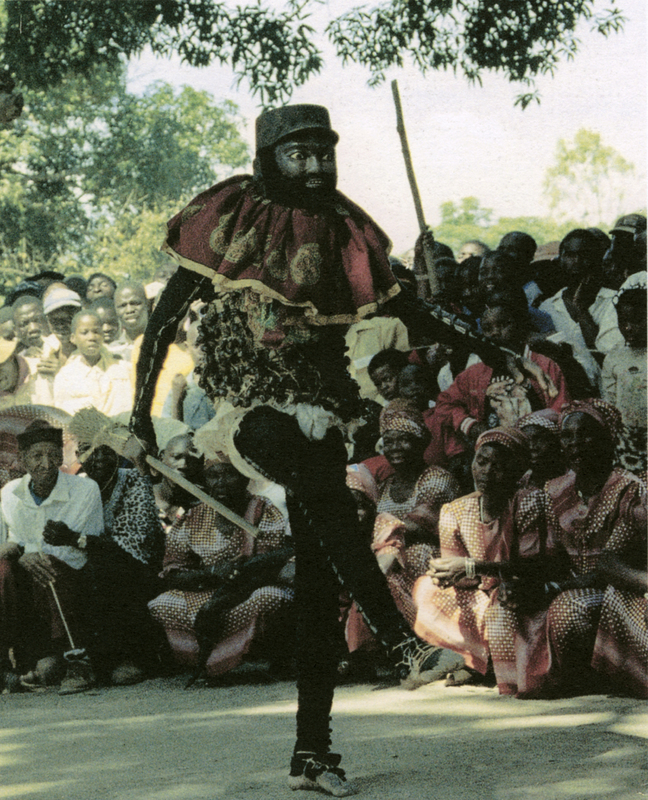 Portrait masks that depict national heroes as well as performances that commemorate historical events are an artistic legacy of Mozambican socialism. 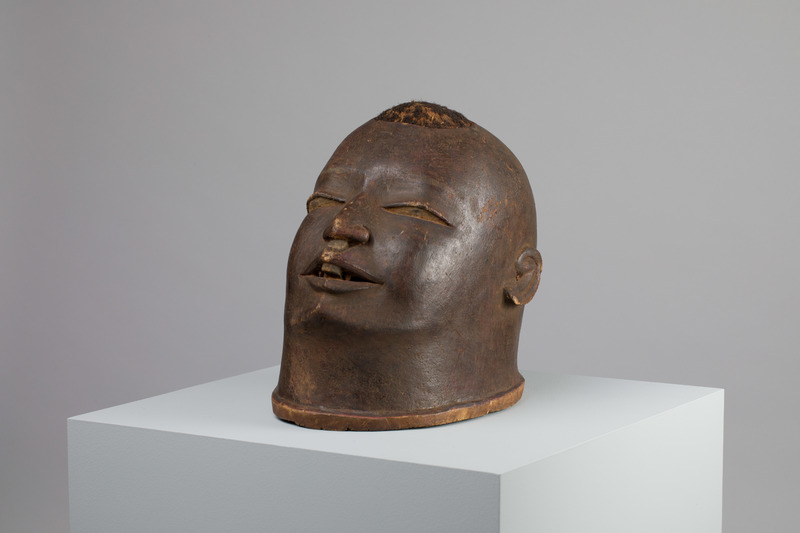 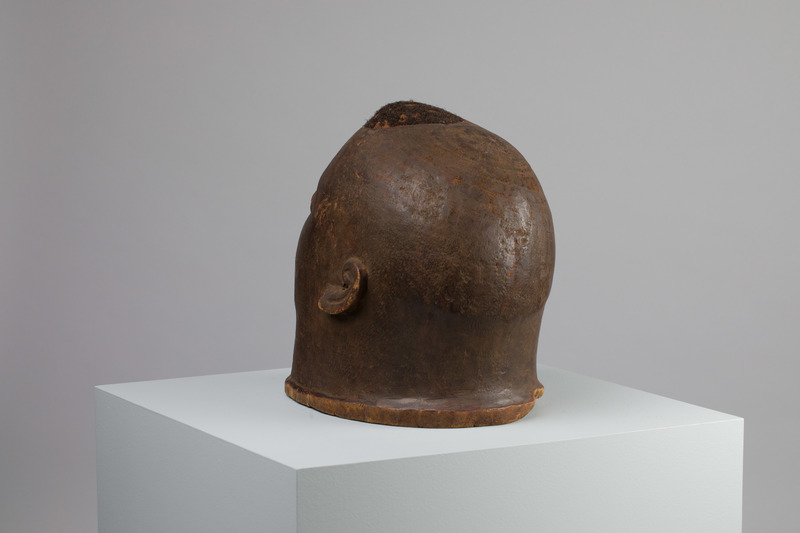 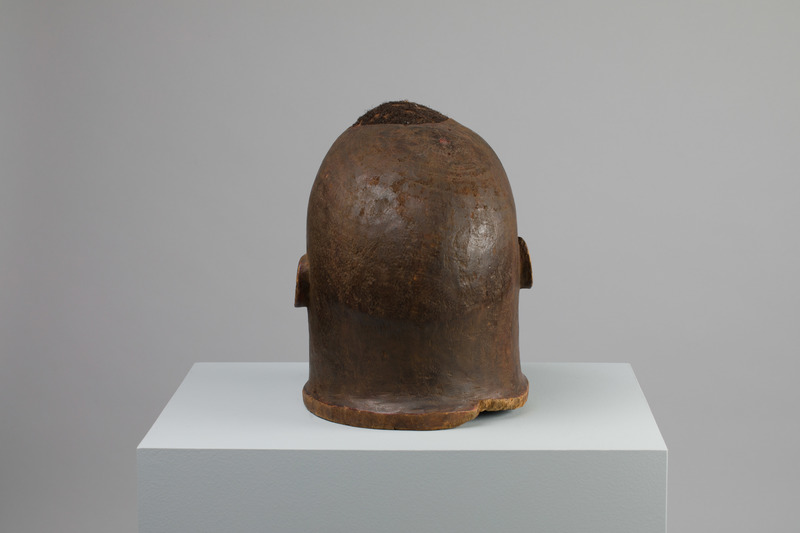 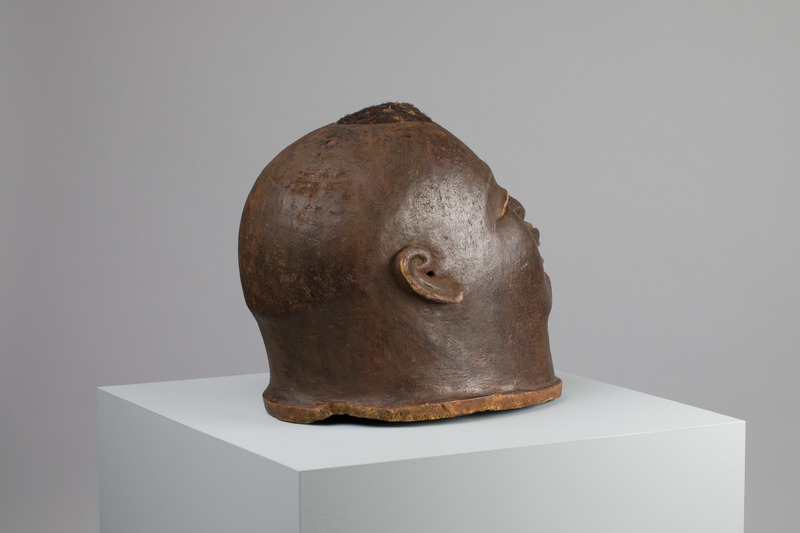 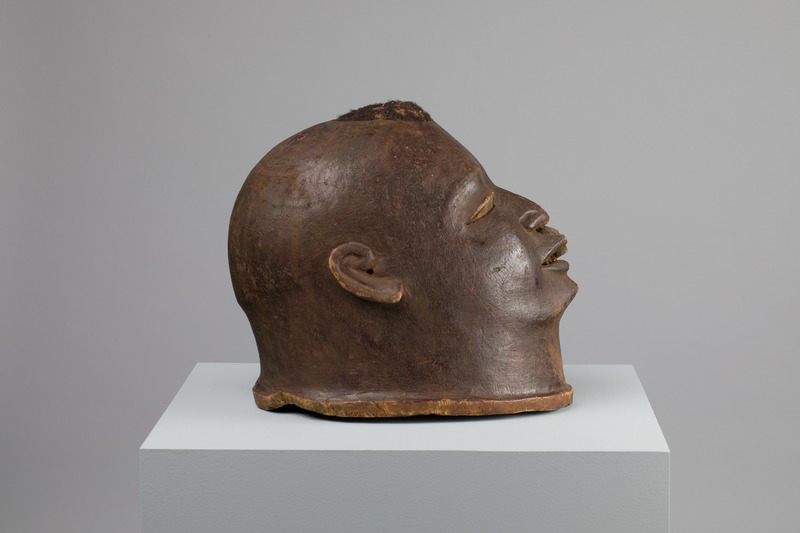 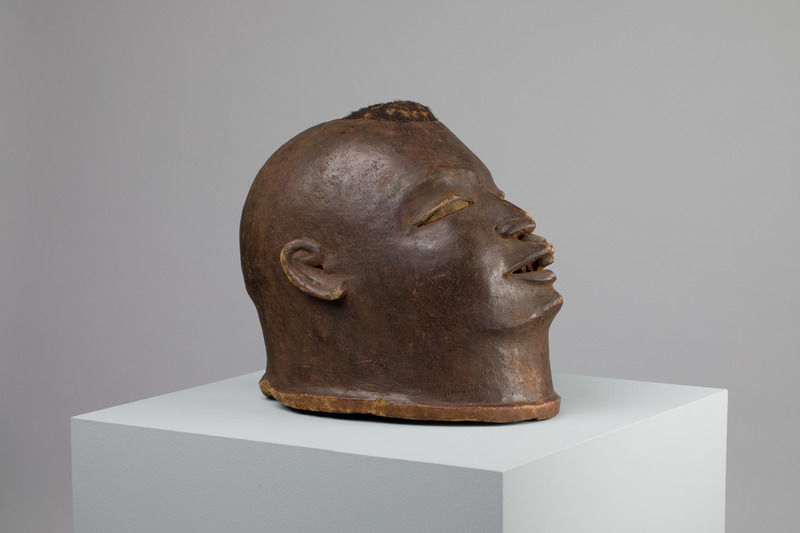 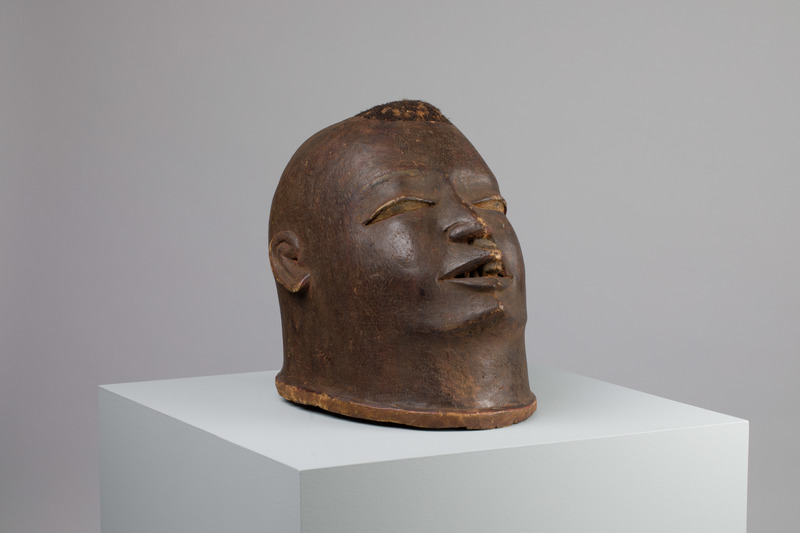 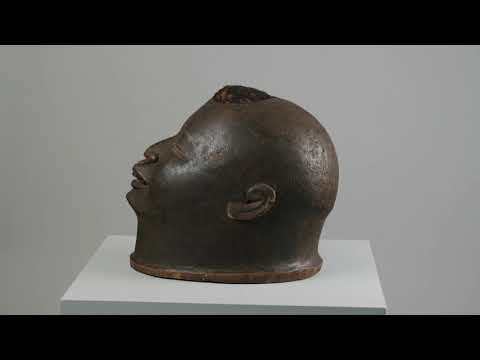 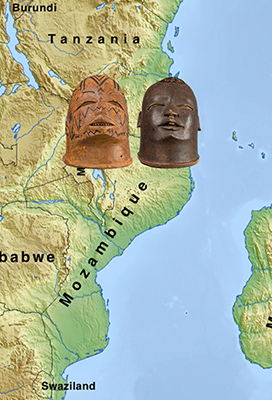 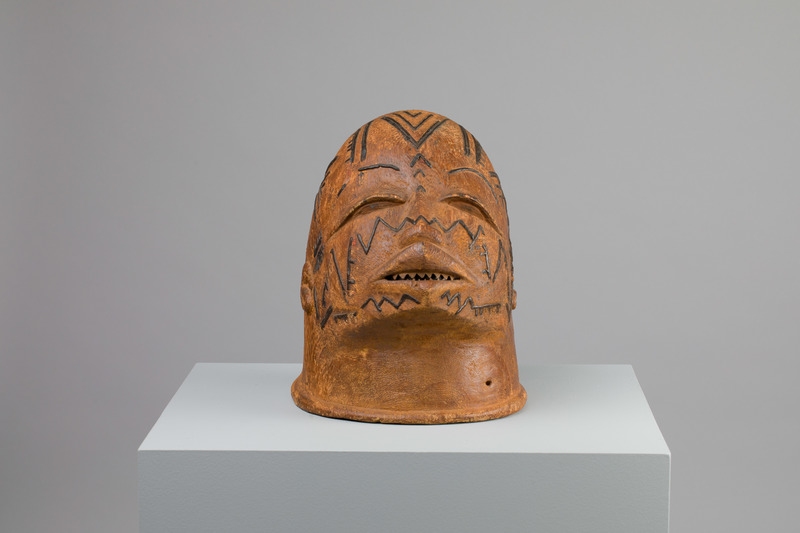 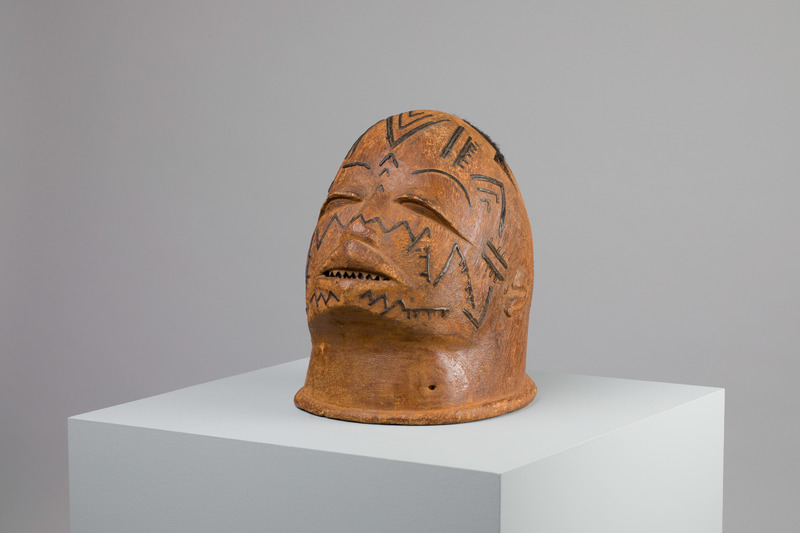 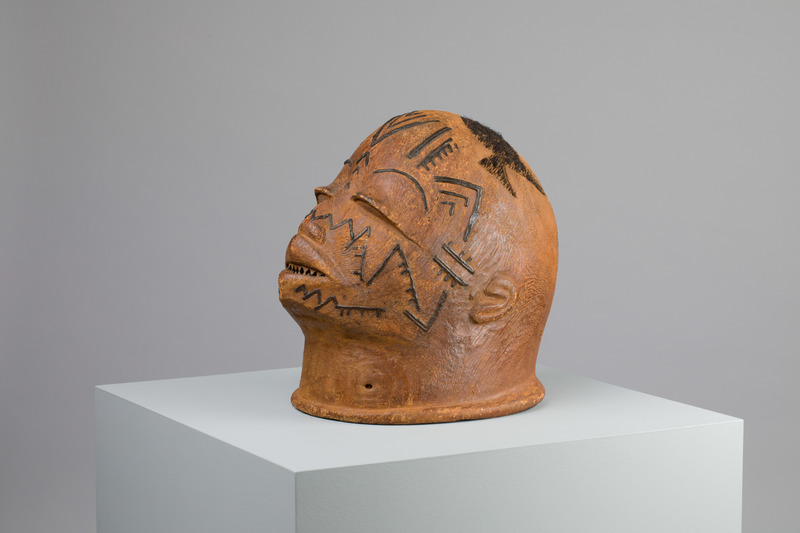 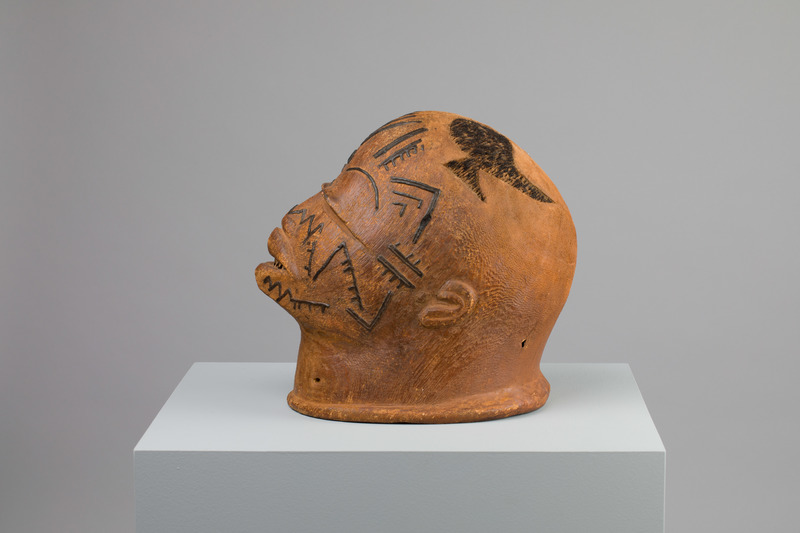 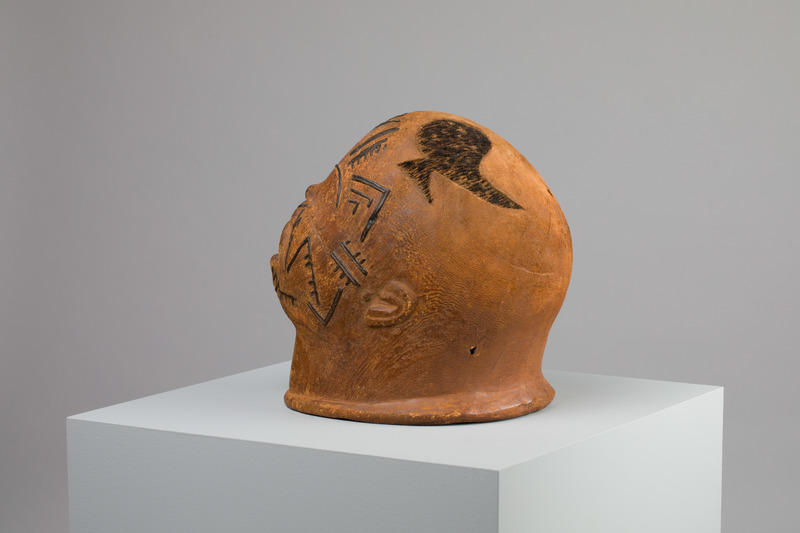 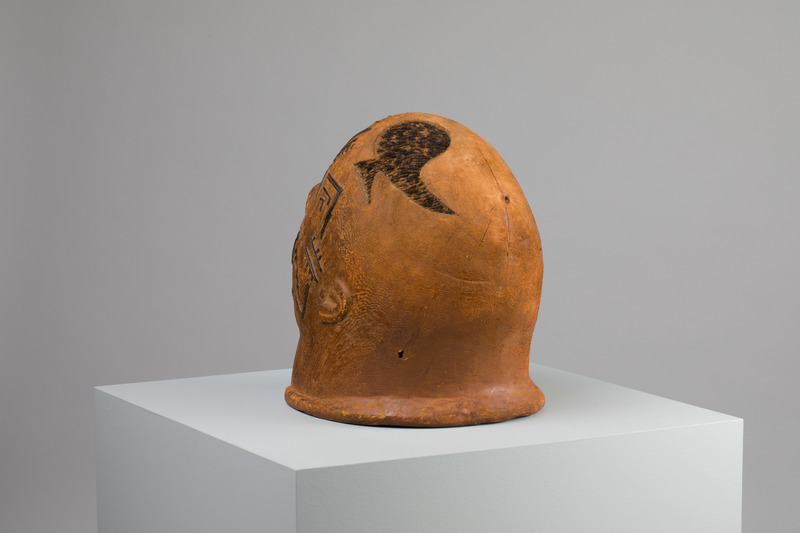 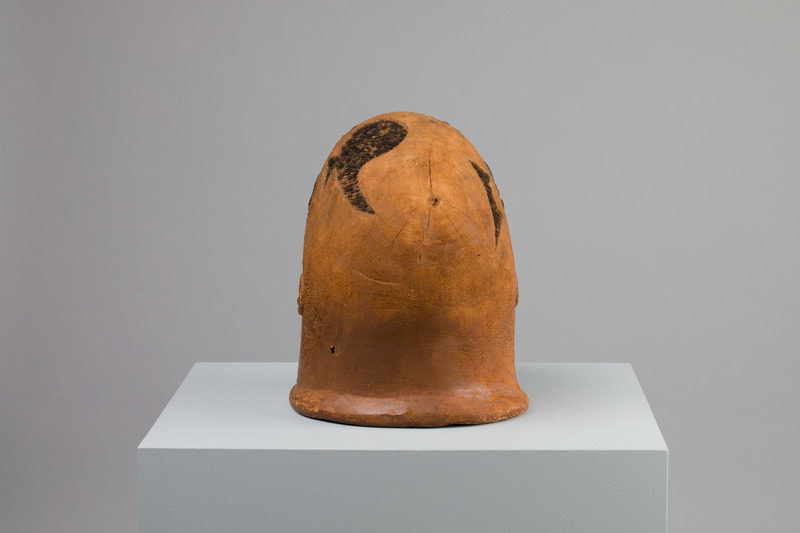 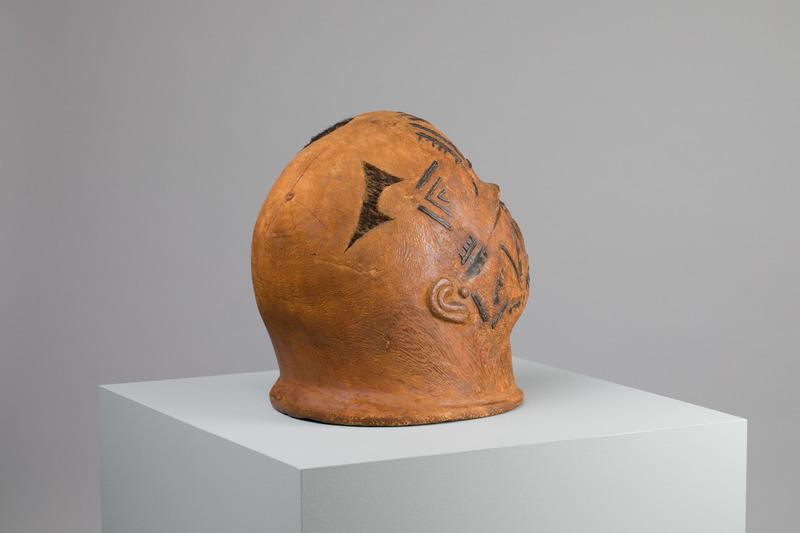 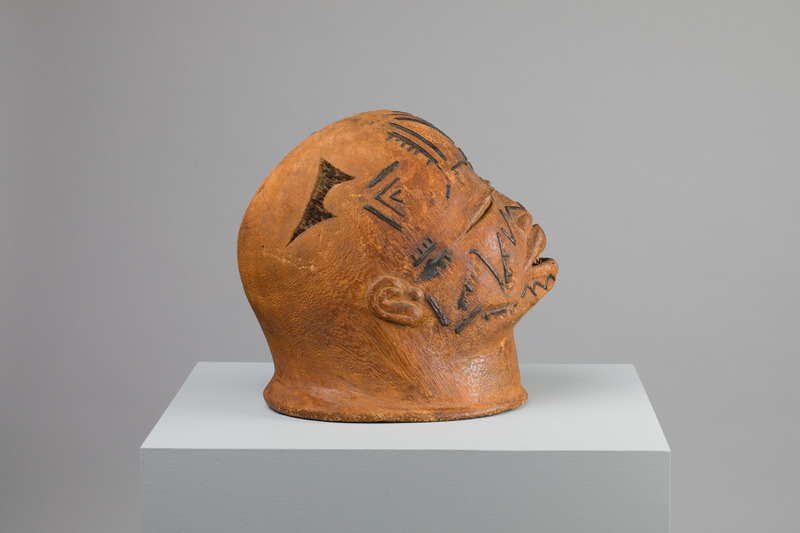 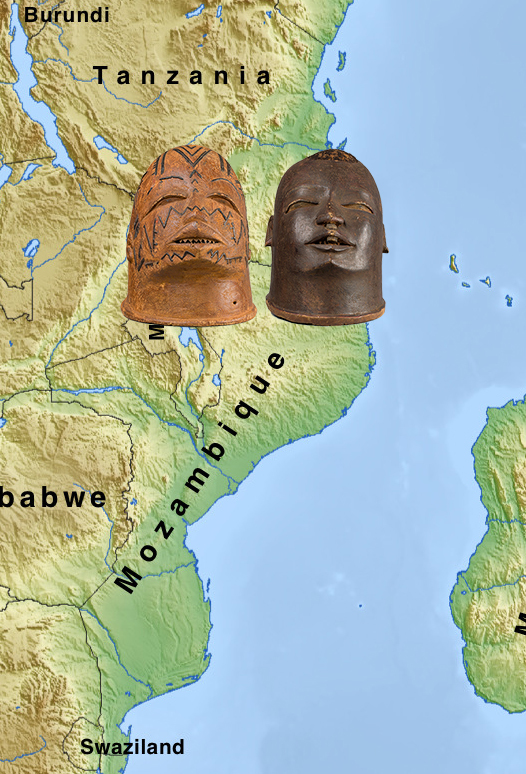