Headrests were used in many parts of the world, including China, Japan, Oceania, and Africa. African use of these exquisite sculptural forms has a long history going back to ancient Egypt. They used to be much more common throughout the continent but even now continue to be in use in many places in northeast and eastern Africa. One of the most frequent questions I am asked about headrests (by people who know of my work on the headrest exhibition Sleeping Beauties, 1993, which came to Penn State in 1995; see Dewey 1993) is, how can people sleep on such hard surfaces? It depends on what you are used to. While people in the West usually recline on soft mattresses and pillows (and most Africans are now doing the same), Africans have long mostly slept on mats. If you sleep on a hard mat, it is not difficult to sleep on a hard headrest. Even a Westerner, lying on the grass, will naturally put an arm under the head to raise it up off the ground. A headrest is little different, for its primary purpose is to raise the head up off the ground.

This headrest from the northeastern part of Africa is quite typical of many headrests, with a base, two cylindrical supports or columns, and a slightly curved sleeping platform above. What makes it highly unusual, however, is that the columns are wrapped with monitor lizard skin strips to form a container. Anthony Jack illustrates a similar one and states that the Musée Royal de l’Afrique central, Tervuren, has similar examples from Ethiopia and Somalia (1991, 30). All seem to be made of monitor lizard skin wrapped around the double supporting columns of the headrest or stool. Ravenhill, however, illustrates a similar one in the Smithsonian collections ascribed to an undetermined Sudanese people (1991, 14–15). The clearest indication of where they were used was provided by John Mack when he was at the Museum of Mankind (whose collections have now been absorbed into the British Museum). He declared that these types of headrests can be “fairly clearly provenanced as Bari. Clearly we have material in our own collections from Evans-Pritchard [the famous British anthropologist who worked in Sudan] who gives them as such and very likely collected them in the field” (personal communication, July 1992). The Bari mostly live in the southern part of what is now South Sudan, but some also live in Ethiopia, Uganda, and the Democratic Republic of the Congo. Headrests that are also containers are quite rare. A few exist in southern Africa (Dewey 1993, 74), and some are known from neighboring peoples such as the Bwaka and Azande. Why only the Bari ones were bound with monitor lizard strips is unknown.

The Bari also made another type of headrest, which is constructed of bent wood held in place by leather strips (see Sieber 1980, 113, Sieber and Herreman 2000, 156; and Falgayrettes 1989, 51, where the leather is missing). It is interesting that some Kenyan pastoralists, such as the Pokot and Turkana, also use wood and leather construction for some types of headrests but none of these form containers. The Bari are a settled agricultural people of southwestern Sudan and seem to have no interactions with these pastoralists. Anthony Jack says these Bari leather-bound receptacles were used for holding small valuables or tobacco (1991, 30), but there seems to be no other documentation as to this or any other uses. 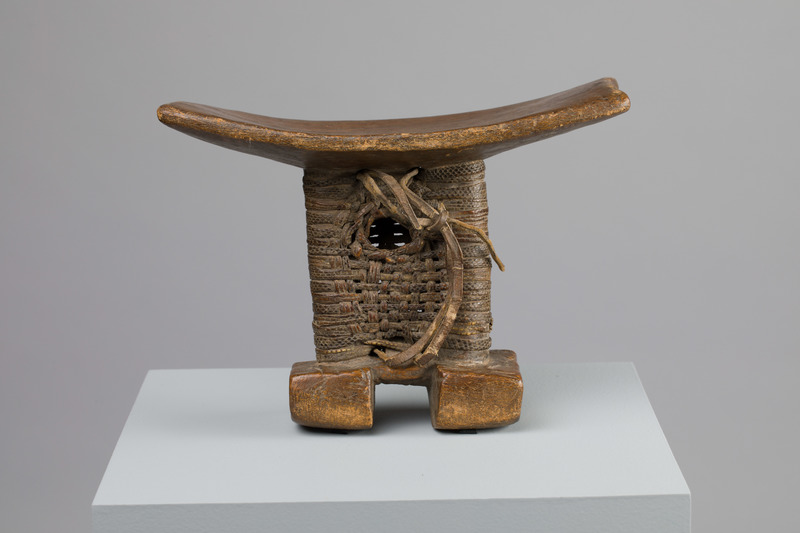 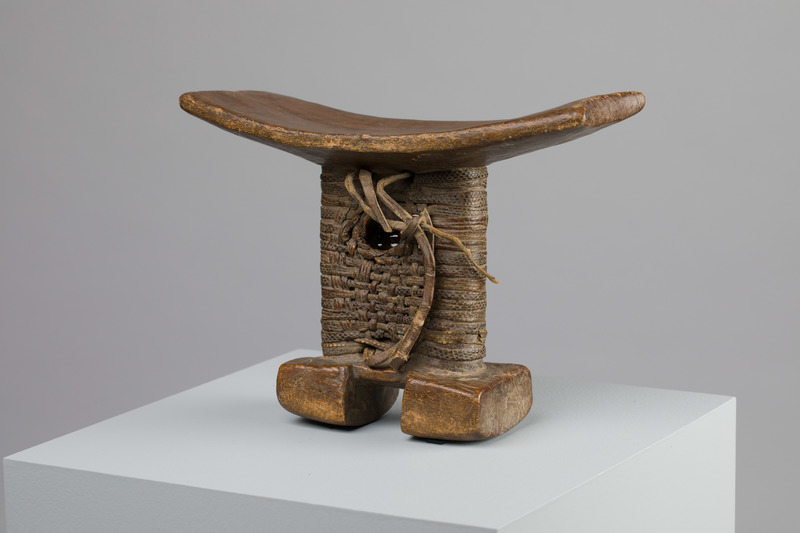 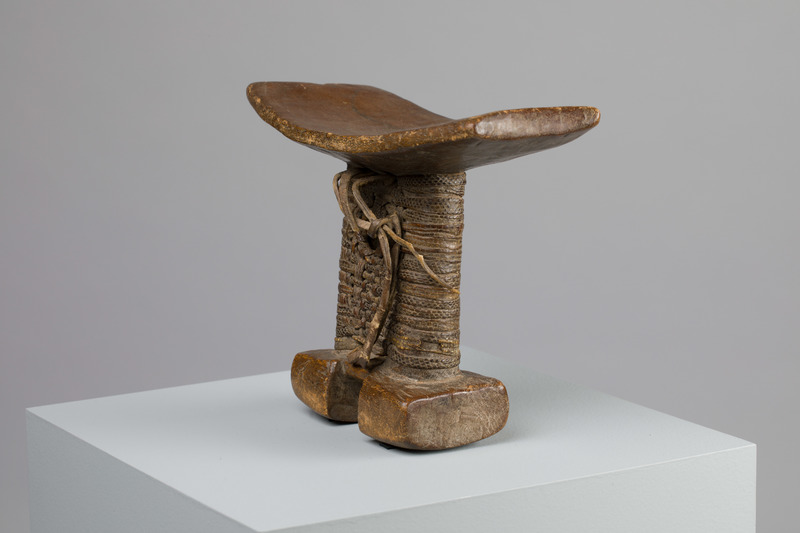 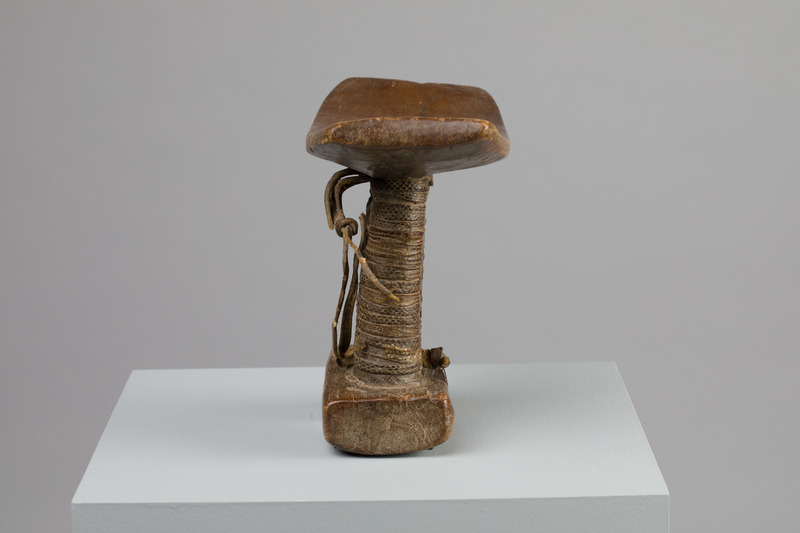 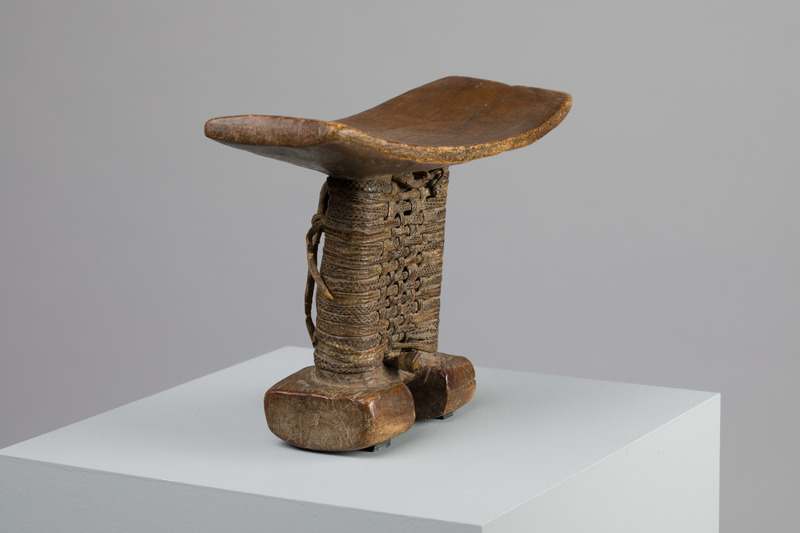 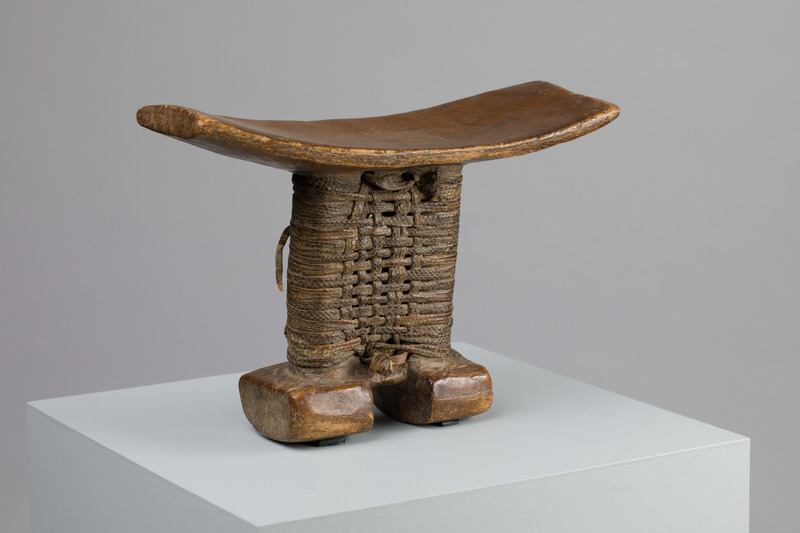 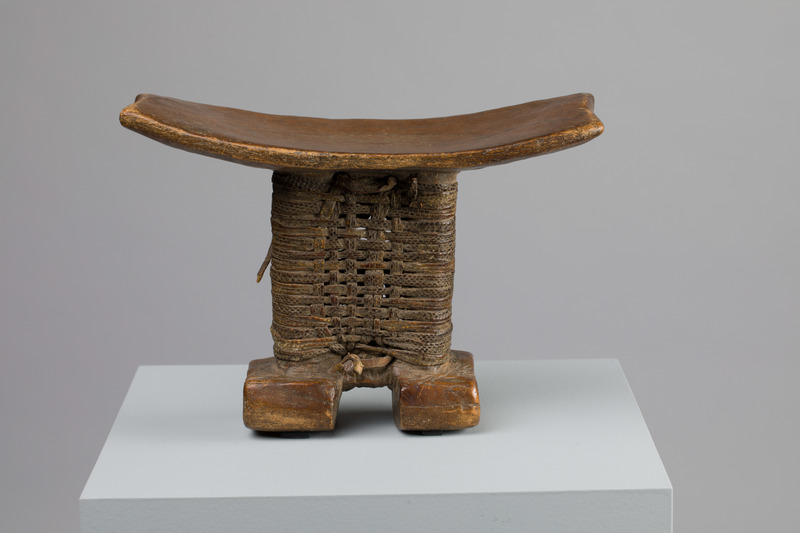 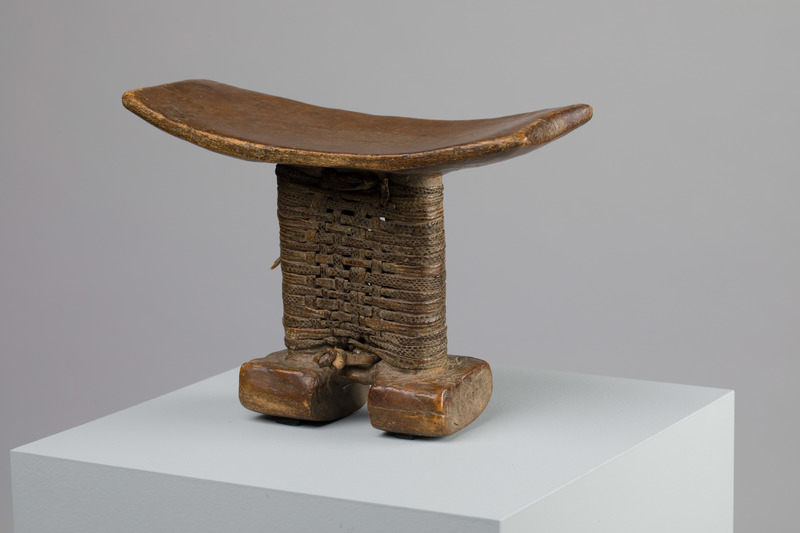 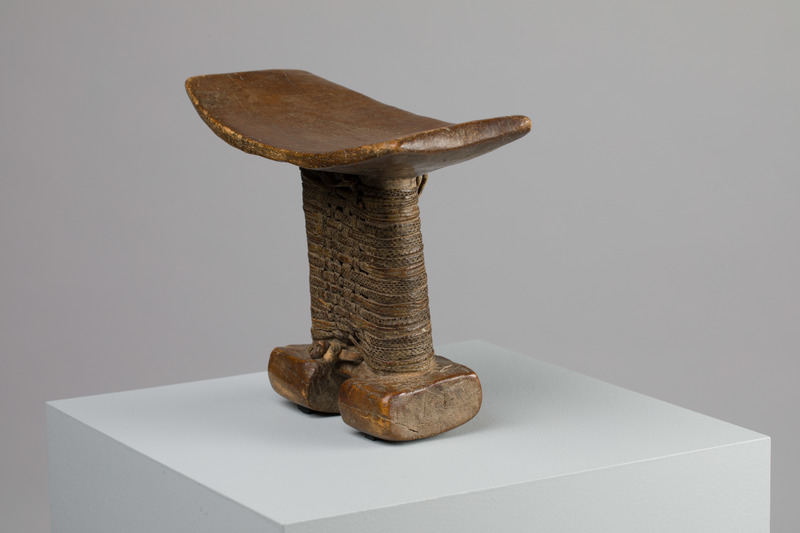 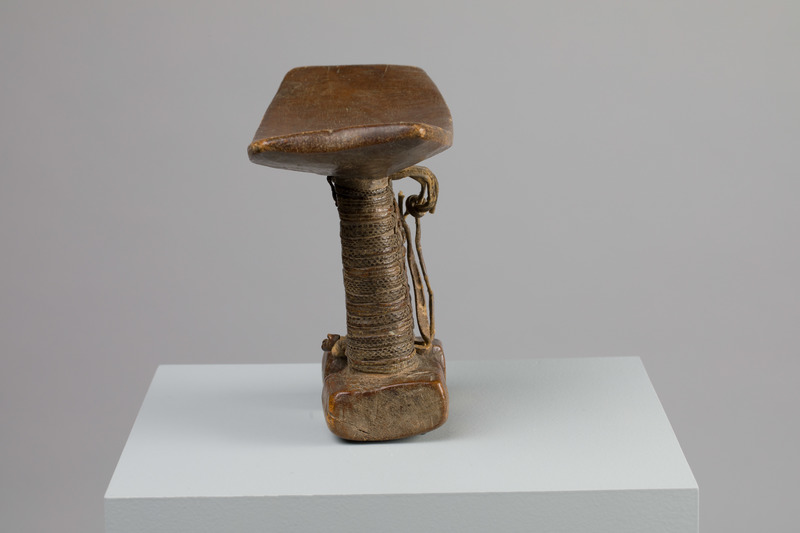 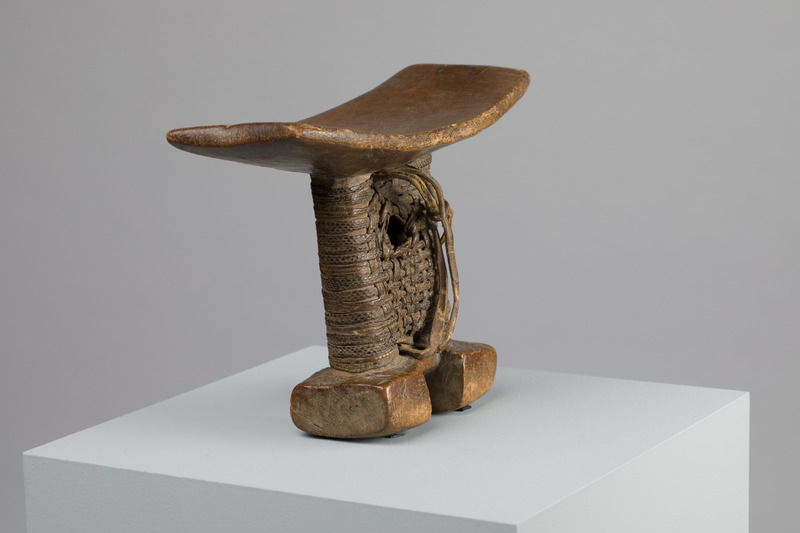 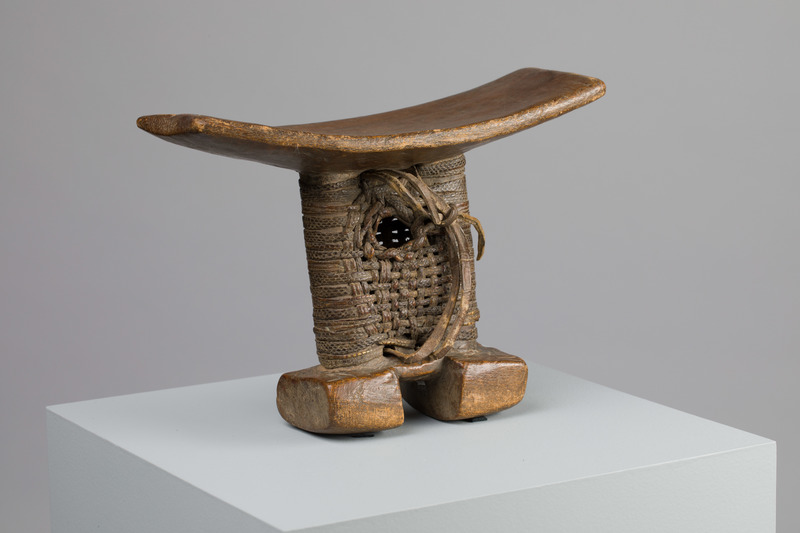 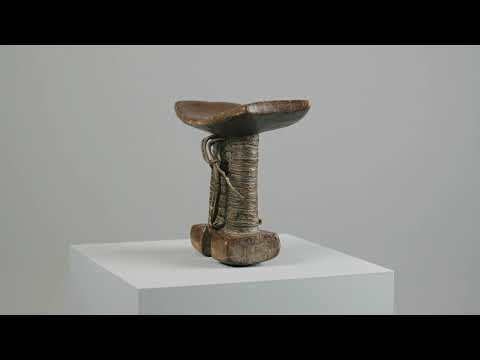 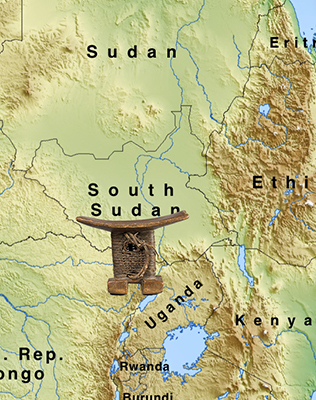