The graceful slopes of this wooden vessel are carved in the classic style for a Baganda milk container. The tapered neck is usually covered with a tightly woven basketry or wire lid to shield the contents from dirt and flies. The wider base helps with stability and keeps the contents from spilling during transport. Grooved, incised lines of decoration around the lower portion of the neck are a distinctive characteristic for this type of vessel. Traditionally, each cow has her own special milking pot, and only wooden vessels may be used for the milking and storage of milk (Trowell and Wachsman 1953, 15, 109).

For many of the neighboring pastoralists who also use these grooved milk pots, the form is known as ekyanzi (Trowell and Wachsman 1953, 285). The containers are stored in the back of the home on small raised platforms, the sides of which are sometimes decorated with ornamental patterns in natural earth colors. They are cleaned, fumigated, and cared for by women, and men do the milking (Trowell and Wachsman 1953, 109; Curnow 2014, 34).

The Hima of the Great Lakes region in Uganda and Democratic Republic of Congo produce and use milk containers of the same design, and are likely the originators of the form (Lugira 1970, 93). Theirs are carved from the omusisa tree (Albizia coriaria), and are often more elaborately decorated with carved surface patterns that include zigzags, stars, arrows, and even cows or snakes. They are sometimes embellished with graphic metal cutouts as decoration or for repairs. One explanation given by the Hima for the grooves, or omubabu, around the neck of a vessel is that they operate as a measuring mark. If a cow is a good producer, her milk will reach the level of the markings (Trowell and Wachsman 1953, 109).

The Baganda people are sometimes referred to as “the King’s Men” because of the significance of the role of their king in their political, social, and cultural institutions. The graphic zigzag pattern work in this woven cover design is characteristic and similar to the motifs that appear on royal beaded items, as well as larger coiled basketry and incised decorations. Trowell tells us that black-and-white color combinations were broadly popular, but for the royal objects the “favourite colours in the old beadwork seem to have been a dark blue and another bright, light blue and a deep crushed strawberry red” (Trowell and Wachsman 1953, 275). The predominance of those particular colors may also be a reflection of their availability in early trade beads (275).

Popular memories from pastoralists of this intra-lacustrine region of East Africa tell us that one must always hold a milk pail with both hands. This is out of respect for the life-sustaining gift of milk from the cow and to display reverence so that she lives a long, healthy life.

Lugira, A. M. 1970. Ganda Art: A Study of the Ganda Mentality with Respect to Possibilities of Acculturation with Christian Art. Kampala: Osasa. 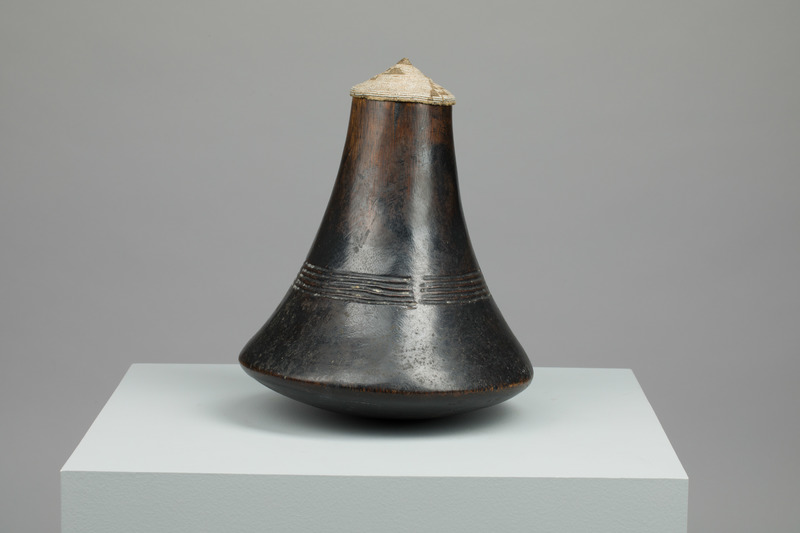 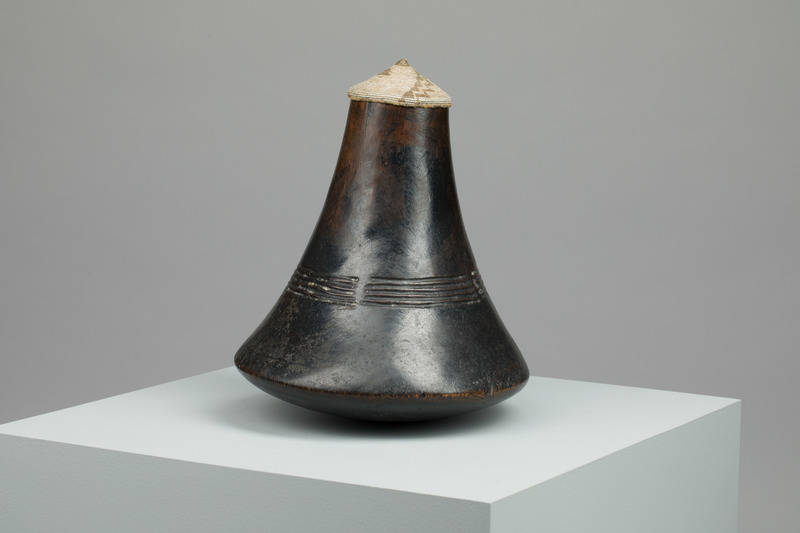 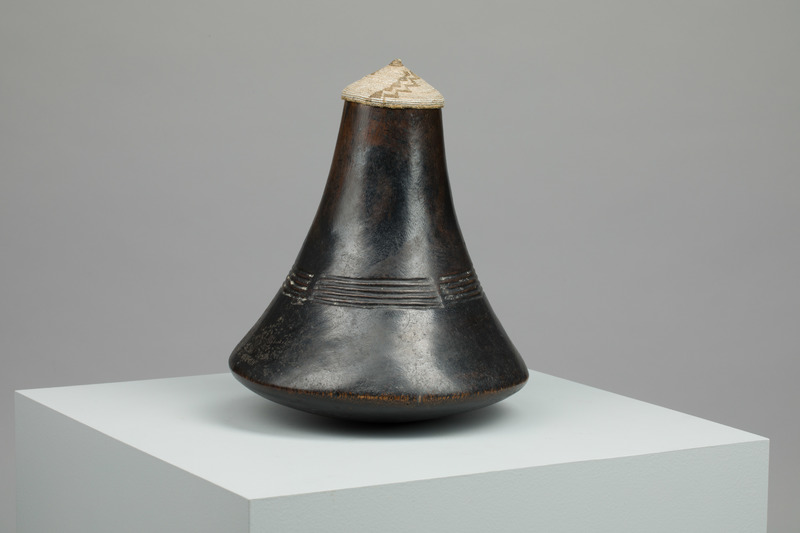 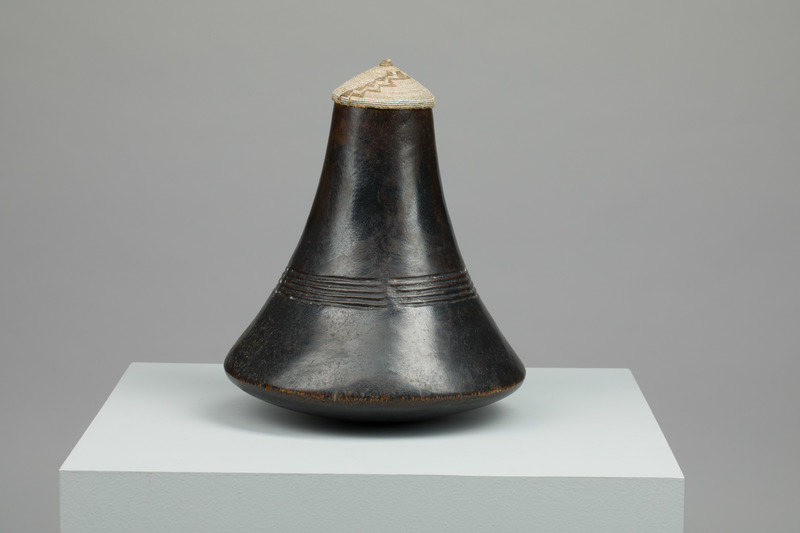 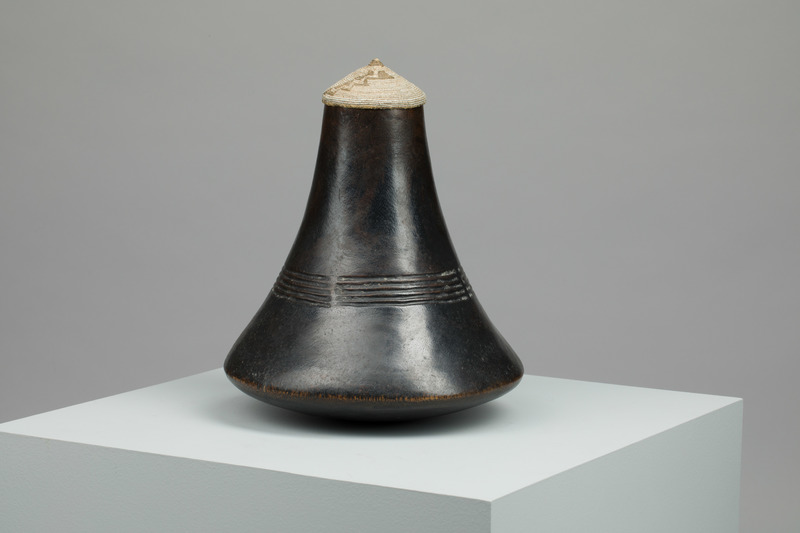 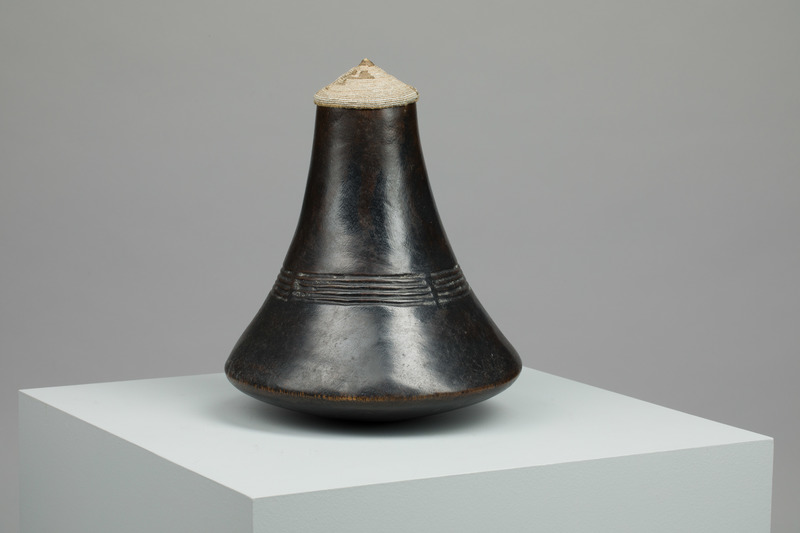 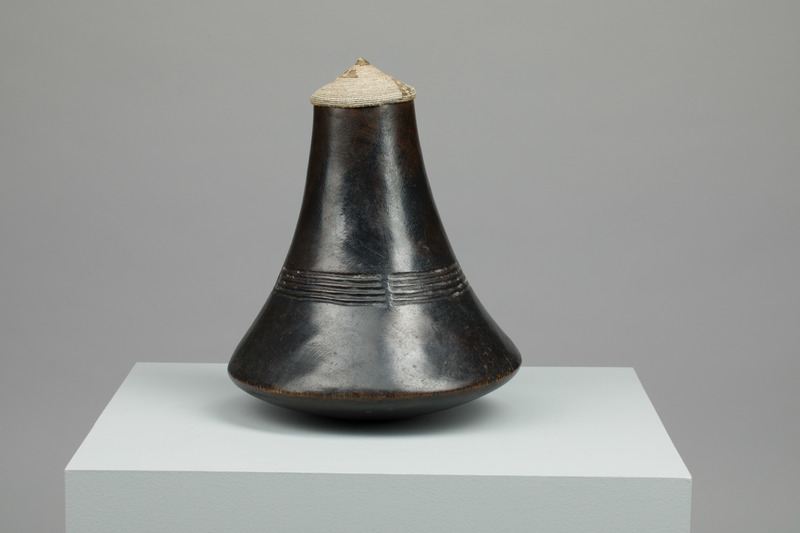 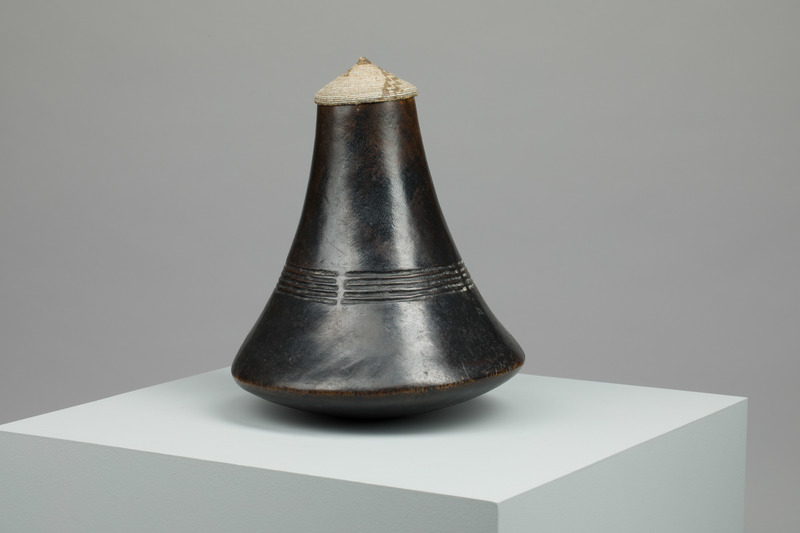 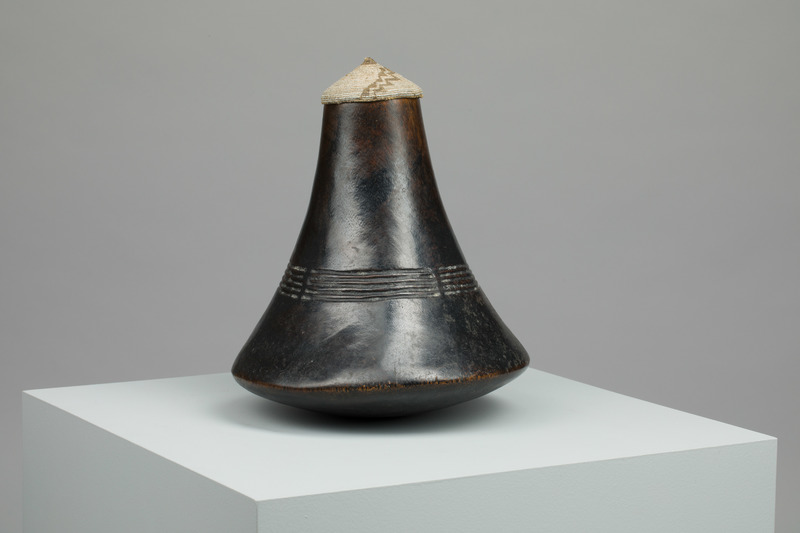 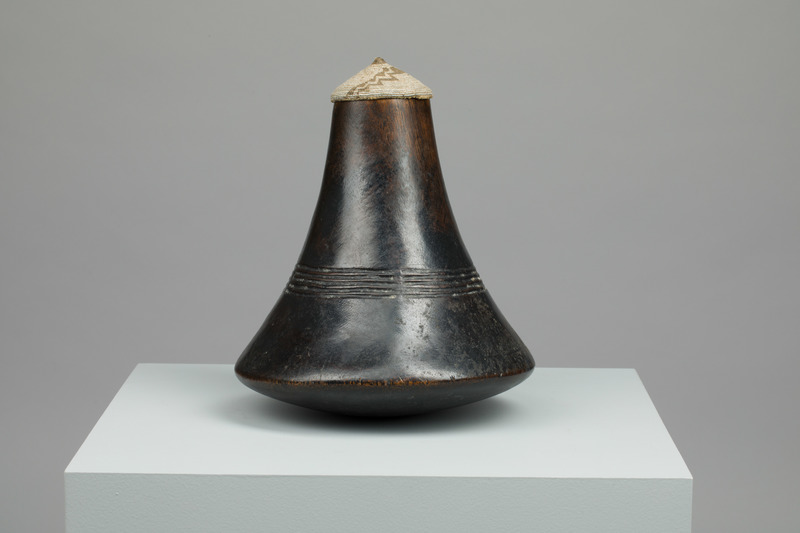 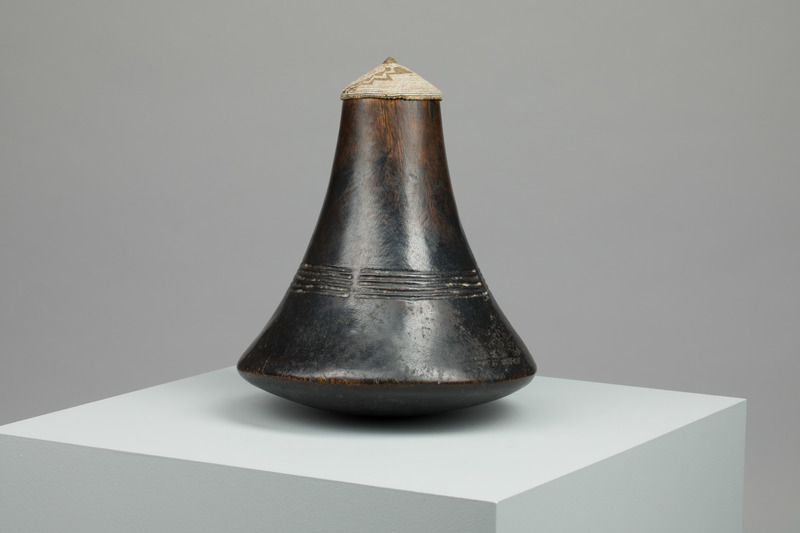 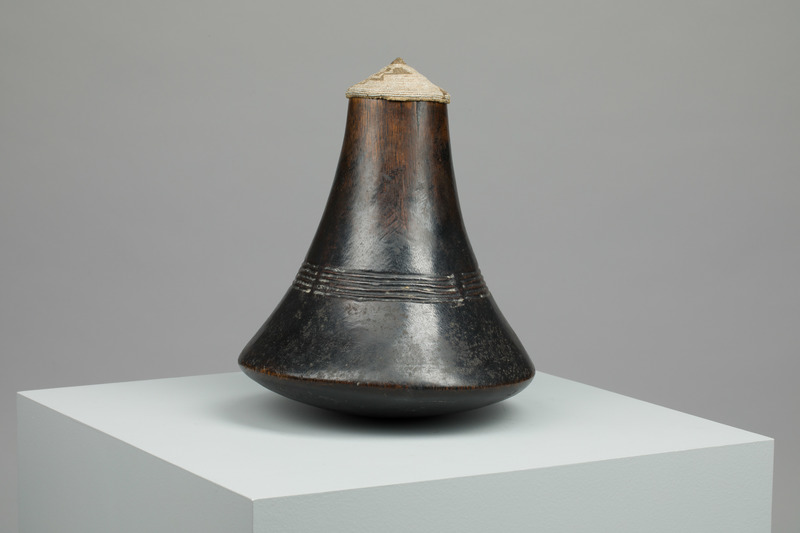 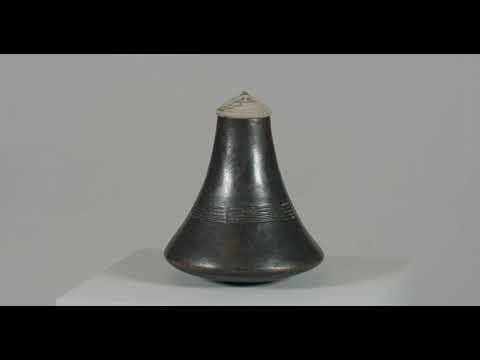 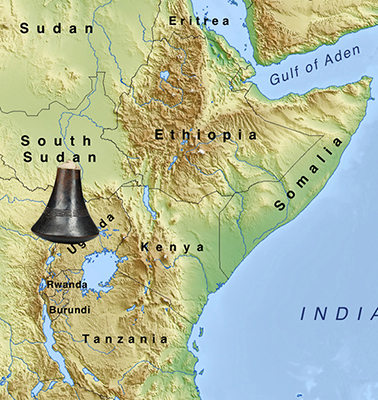