Throwing knives comprise a stunning category of African blacksmithing. They are a potent argument against old assertions that creativity easily divides into art and craft. Huge numbers of these implements are disarmingly elegant creations made by master smiths across a swath of central Africa two thirds the size of contiguous United States. Though less frequently used today, until the early decades of the twenty-first century they occurred in profusion over much of central and equatorial Africa and were employed across a range of activities from war to pomp and circumstance, to personal adornment to sacred ritual (McNaughton 2019, 194).

Peter Westerdijk has done the most exhaustive study of African throwing knife production, use, and distribution, and he identifies this type of knife as one of several similar varieties made by the Azande peoples of northern Democratic Republic of the Congo (Westerdijk 1988, 201–24; also see Felix 1991, 97–107). Christopher Spring documents how these types of knives were used by the Azande ruling clan, the Avongara, but also by a number of other peoples who came under Azande influence (Spring 1993, 79). He also recounts a number of descriptions by famous explorers (e.g., Schweinfurth 1873) and by the famous anthropologist Evans-Pritchard (1957) of their use in warfare. Terry Childs’ (2016) microscopic and X-ray examination of a throwing knife further documents the expertise of the blacksmiths, as several of the forge welds joining pieces of the knife are not visible even under a microscope.

Aerodynamically balanced to whirl through the air, they could be thrown either overhand or sidearm. Frequently aimed at opposing armies and the legs of cavalry horses, the multiple blades could inflict considerable damage. In addition to being weapons, embellished throwing knives functioned as emblems of status for their owners, and they were frequently used as currency tokens (a form of money) for transacting exchanges. The Azande, one of the most renowned state-builders in the northern Democratic Republic of Congo, used several types of throwing knives. Their soldiers protected themselves with an almost body-length shield. A spare throwing knife was kept ready by the back handle of the shield, and the Azande were adept at knowing when to jump up to dodge an incoming throwing knife skimming along the ground (Spring 1993, 81–83; McNaughton 2019, 202–3).

Zande warrior (circa 1950) holding a throwing knife and shield. 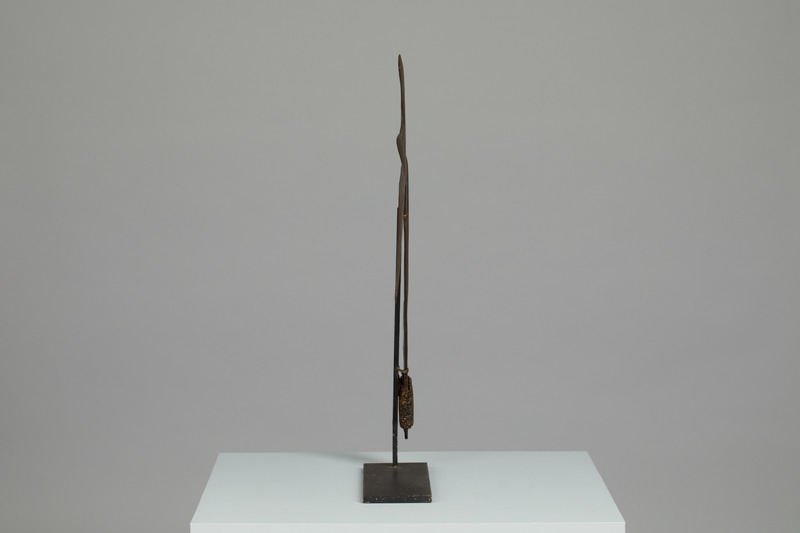 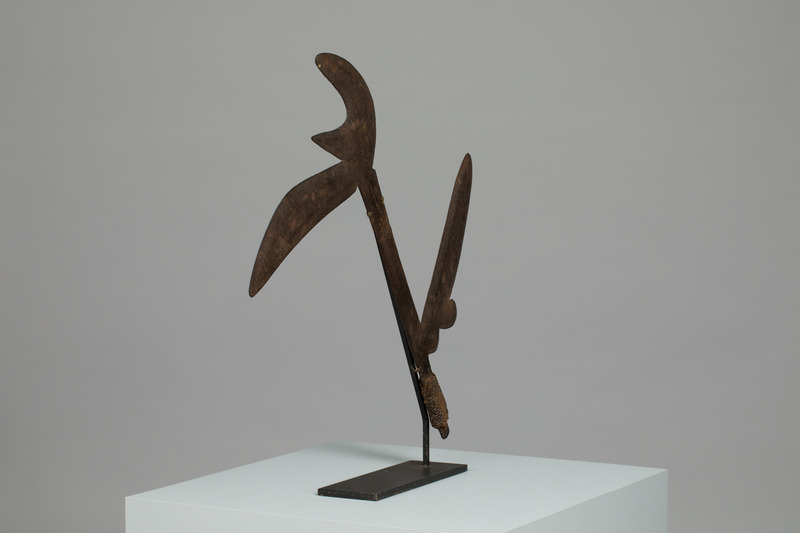 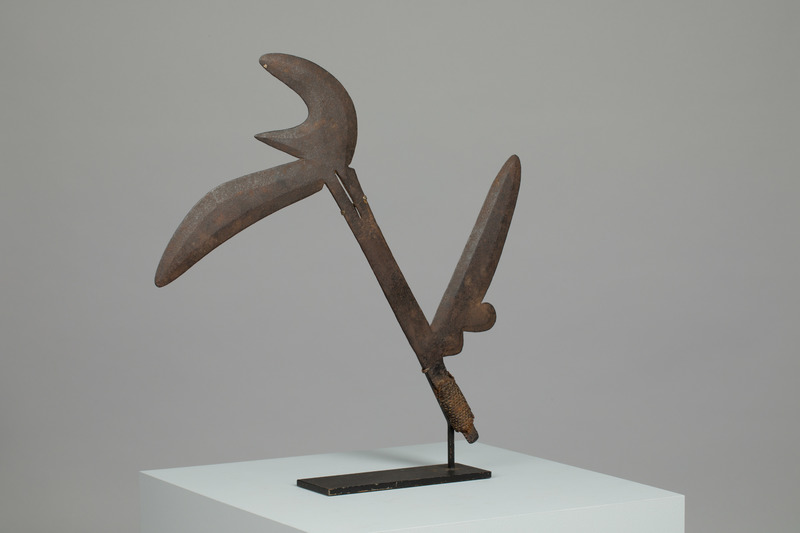 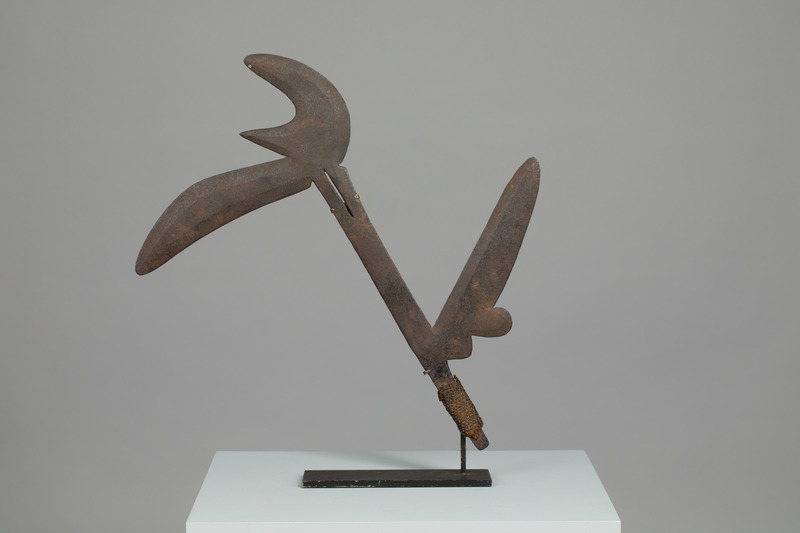 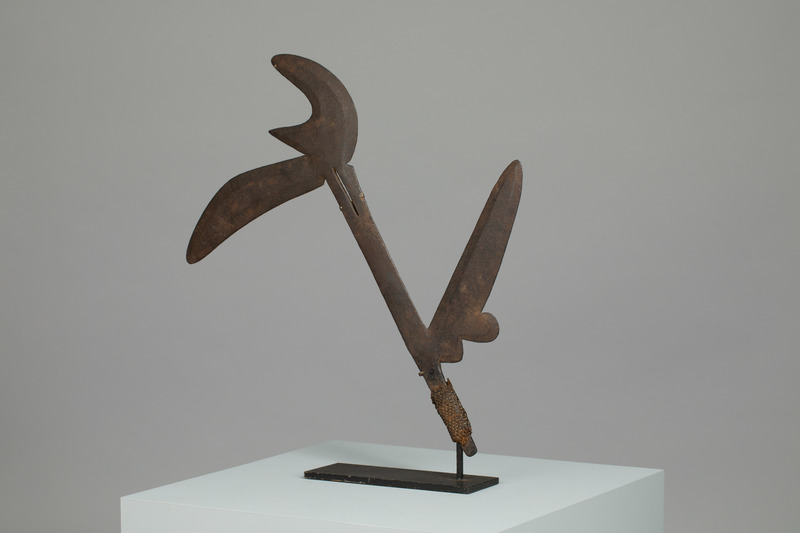 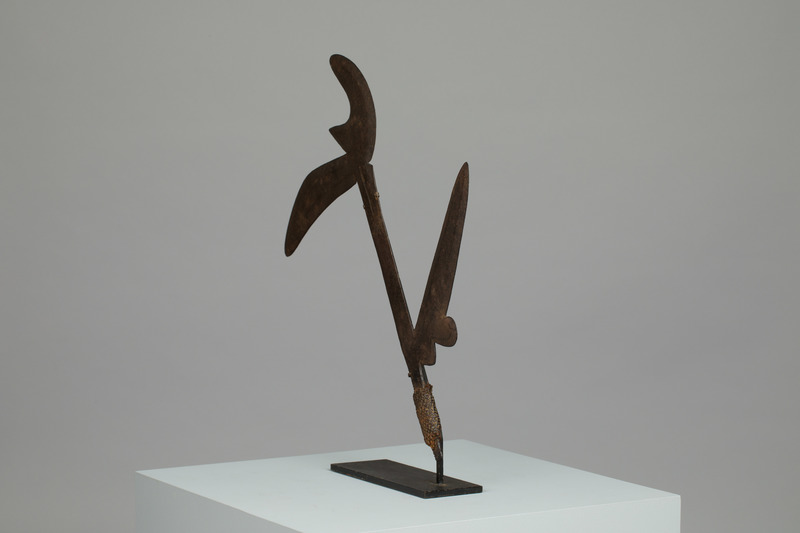 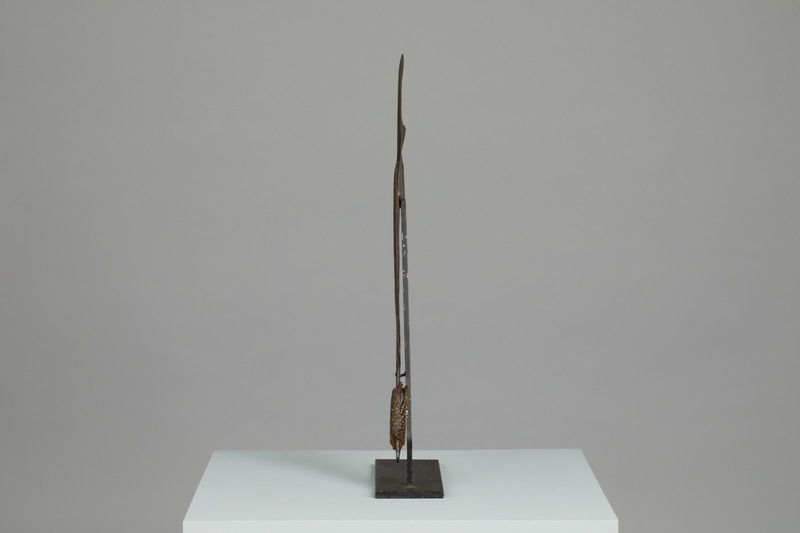 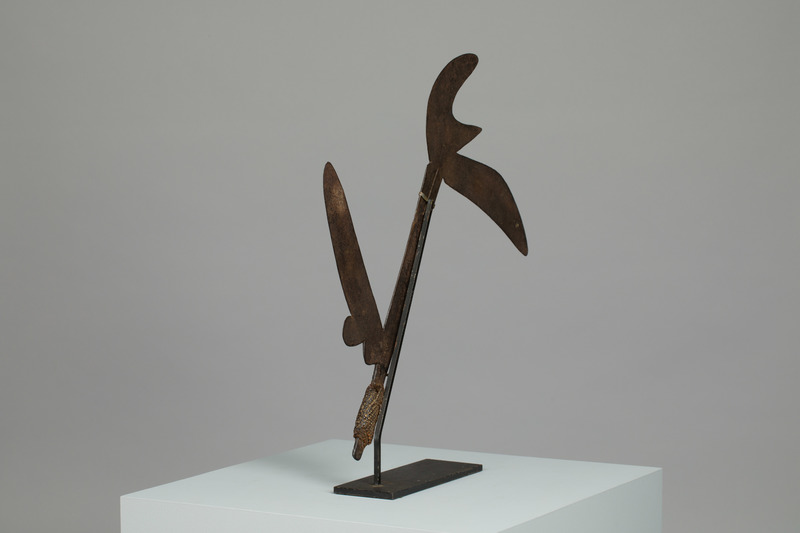 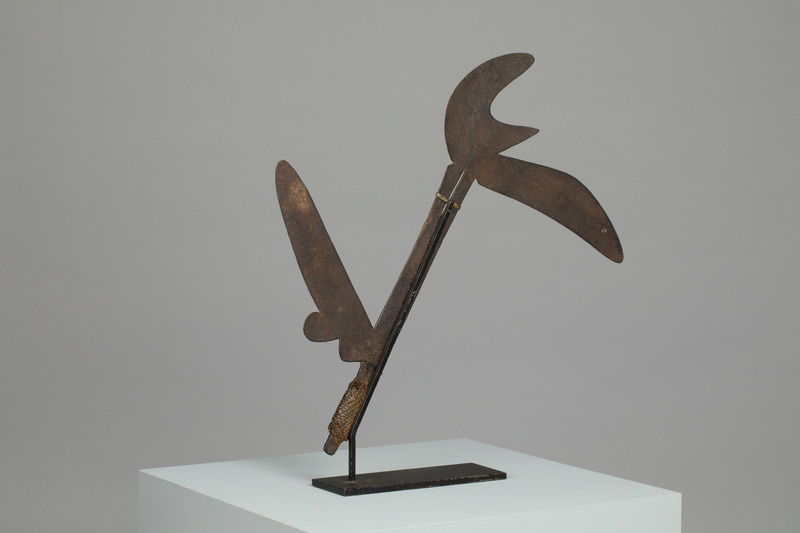 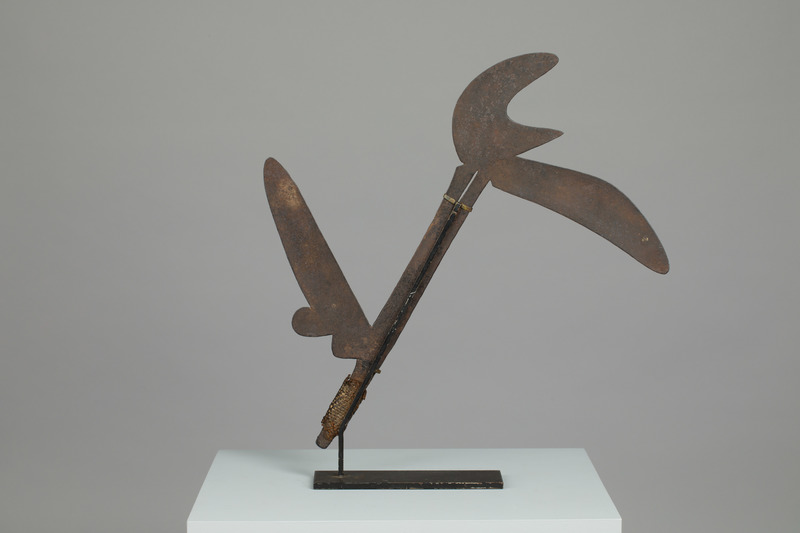 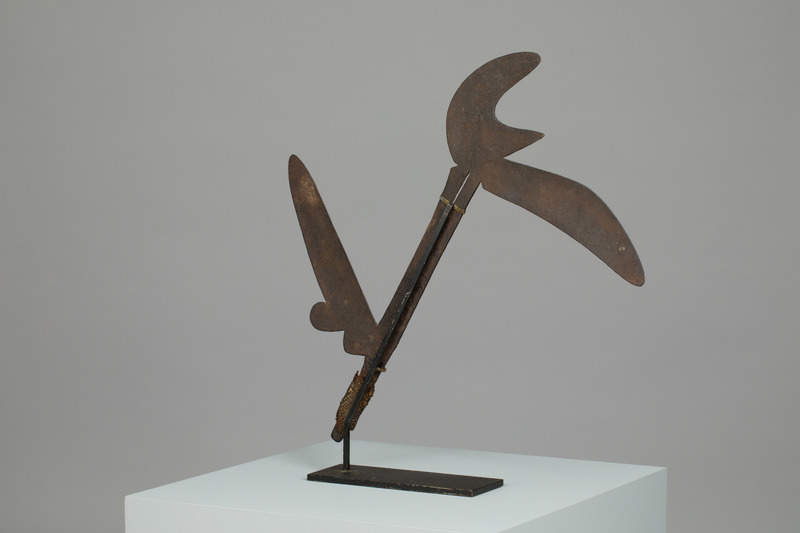 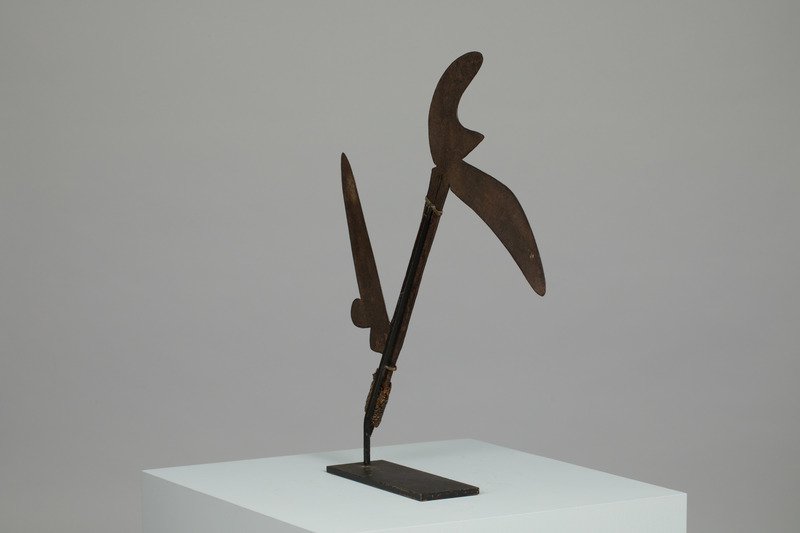 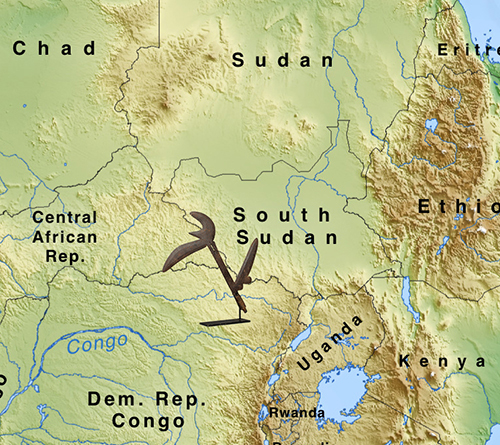 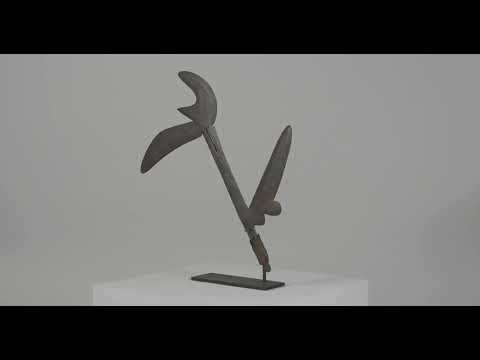