This staff probably functioned as an emblem of office for a chief or other high-level dignitary of the Luba or related peoples. Many surrounding peoples emulated the political organization of the Luba and copied their regalia, so without specific collection data it is difficult to pinpoint where this staff was made or used.

High-level officeholders carry staffs to public proceedings and as the basis for historical recitations in which they honor their ancestors, brag about the accomplishments of their lineages, and teach their descendants about family ties to Luba kingship. . . . staffs played a critical role in precolonial investiture ritual: the sister or first wife of the man to be enthroned preceded him with a staff of office, which she placed next to a royal stool. The ruler held this staff as he swore an oath of office. . . . When the staff was not in use, its care was assigned to one of the ruler’s wives or titled dignitaries. (Roberts and Roberts 1996, 162)

The rectangular shape above the Janus heads of this staff echoes the shape the Luba memory board or lukasa. These hand-held mnemonic devices, covered with beads, iron pins, and carved incisions, are used by the Mbudye society (men of memory) to recite genealogies and relate the details of the founding of the sacred rule of Luba kings. The backs of the lukasa devices are often covered with geometric cross-hatching patterns (similar to the designs on this staff’s superstructure) that echo the carapaces or shells of a tortoise, honoring the Mbudye association’s founding ancestress—a woman in the form of a tortoise. No two staffs are ever exactly alike. “Each represents the history of a single king, chief or titleholder, including details of migrations, genealogies, local tutelary spirits, and natural resources. Like chronicles and witnesses to the past, these emblems document the local-level political histories that constituted the larger Luba State” (Roberts and Roberts 1996, 151).

Female figures predominate in Luba royal sculpture. Women held important political positions and helped extend the Luba kingdom through intermarriage with outlying chiefs. Women are also the only humans strong enough to be the vessel for the spirit of former kings, and so a woman, known as a mwadi, was the reincarnation of deceased male kings and ruled in “spirit capital” or kitenta (Roberts 2013). So the question must be asked, why is this staff Janus-faced with both female and male (bearded) visages? Luba origin stories revolve around Mbidi Kiluwe, a mysterious hunter from the east who introduced the institutions of kingship to the Luba people when they were ruled by the despotic Nkongolo. Mbidi Kiluwe had a child with one of Nkongolo’s sisters, and it was this son, Kalala Ilunga, who implemented the new sacred kingship system. He is considered the founder of the Luba state and the first king. Could the staff be referencing these male culture heroes as well as using the usual female imagery?

Other Luba Janus figures are known (see, for example, one illustrated in Roberts and Roberts 1996, 230 by the famous Warua Master), and several exist among the neighboring Tabwa peoples. It is therefore perhaps not unreasonable to think one could interpret the meaning of this staff in a similar manner to what Allen Roberts has done for a Tabwa sculpture: “Despite a total lack of information concerning these objects, one can hypothesize that these . . . were used in conjunction with other Janus-faced objects or magic depending on the power of duality, in Bugabo [a protective, and later anti-colonial, secret society] or other contexts . . . Where other Janus-faced objects have medicine bundles between the two faces, here the diviner’s head is the “little world” where transformation takes place as he dreams, a process facilitated by other sorts of magic and protected by medicine bundles” (Roberts 1986, 35). 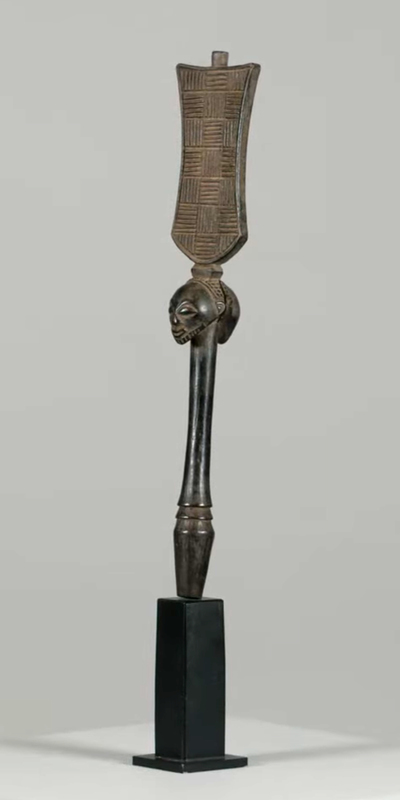 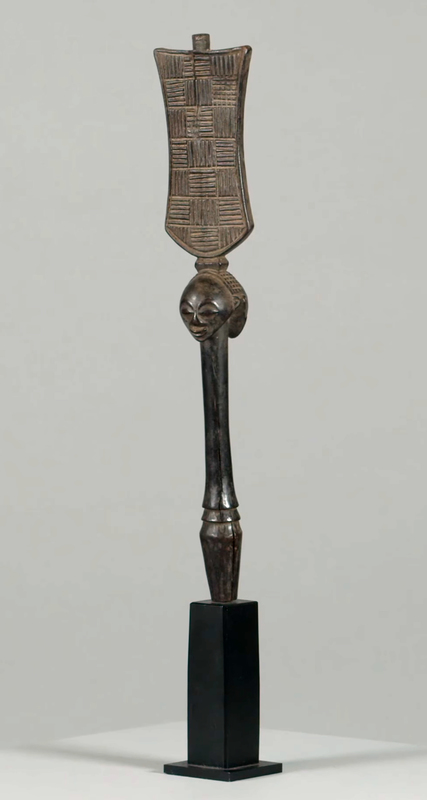 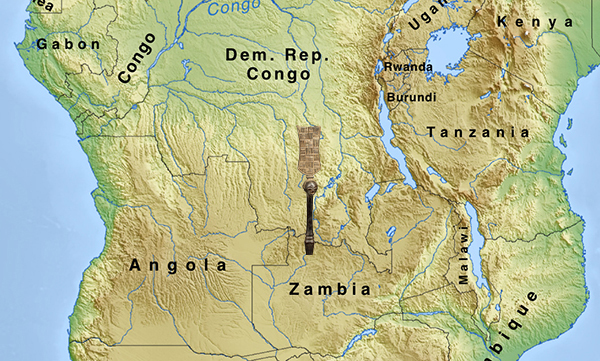 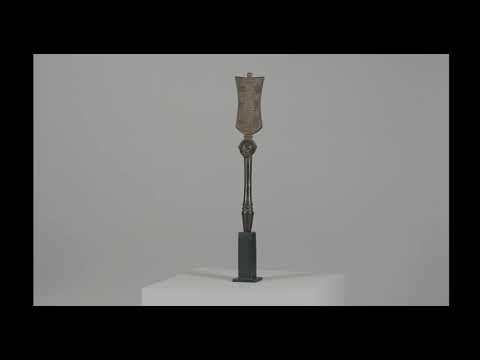