Beads are common embellishments to many forms of African dress. They are also seen in royal regalia and especially in hats and headgear worn by kings, chiefs, and other dignitaries. This hat worn by chiefs of the Pende peoples of the Democratic Republic of the Congo is known locally as a misango mapende. With knob-like projections from the side and top of the hat it looks much like comparable hats in other collections such as the Smithsonian National Museum of African Art and the Fowler Museum of Cultural History at UCLA (Arnoldi and Kreamer 1995, 100–105), and the knobs are a common feature of headware among several neighboring peoples in the region. The Pende chief’s hats were once embellished primarily with black-and-white beads, but more recently seem to have expanded their palette with red, yellow, and blue beads. The hats often have two horns projecting from either side (equating the strength and power of a buffalo to that of the chief), but this one instead has two sets of two curving flat appendages projecting from the sides. Whether these also are meant to allude to the power of a buffalo is unknown. Allen Davis acquired this hat while he was posted in Zaire (now Democratic Republic of the Congo). His friend Father Joseph Cornet (then Director of the National Museum in Kinshasa) helped him by having the hat cleaned to reveal the multicolored beadwork, and commented that it was comparable in quality to ones in the National Museum.

Arthur Bourgeois documented in 1976 that Yaka and Suku chiefs wore hats they called misango mayaka (hats of the Yaka), even though, as they acknowledge,

It is a beaded bicorn hat purchased from the Pende. The beads, however, are common to the whole region and were traded into the area between 1900 and 1930 in connection with the latex industry, and they are likely of Czechoslovakian origin. The hat form is said to be traditional to the great Lunda and Luwa-Sonde chiefs to the southeast of the Yaka and Suku, but it is not considered to be the traditional form used by Yaka and Suku chiefs before 1940. . . . The bicorn feature is regarded as a leadership symbol and related to the ponderousness and bullish strength of the buffalo mpakasa (Syncerus caffer), the largest of African bovines. The triangular motif finds a wider context in incised and painted decoration on Suku and Yaka masks and is found on other items of chiefly regalia such as beadbands and beaded chest coverings. Moreover, proliferation of the triangle motif is found throughout the southern portion of the Zaire [Congo] basin, if not the whole of sub-Saharan Africa. A Yaka and Suku addition to the Pende-made beaded hat is the surmounting pompom of white feathers that merges what is regarded as an older leadership symbol with the imported variety. (Bourgeois 1982, 30) 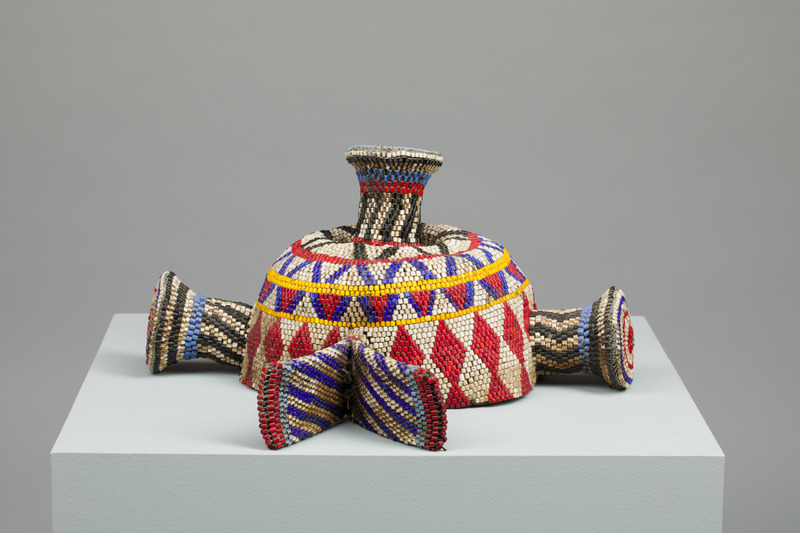 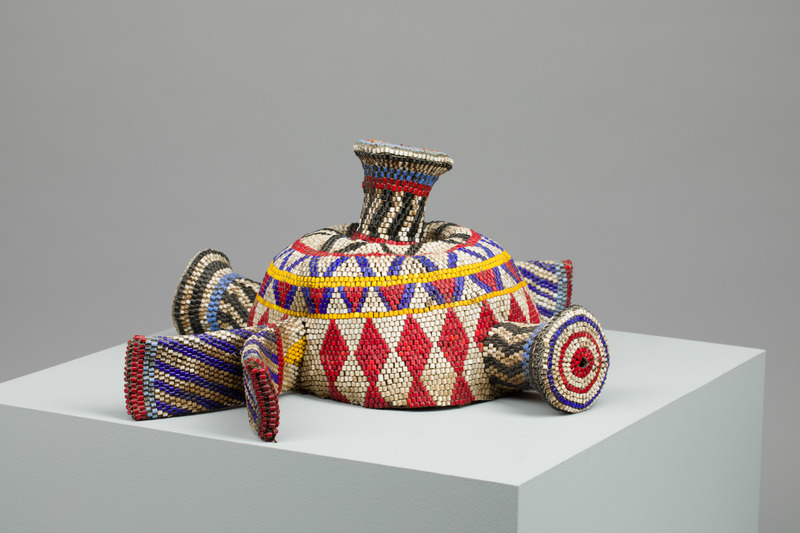 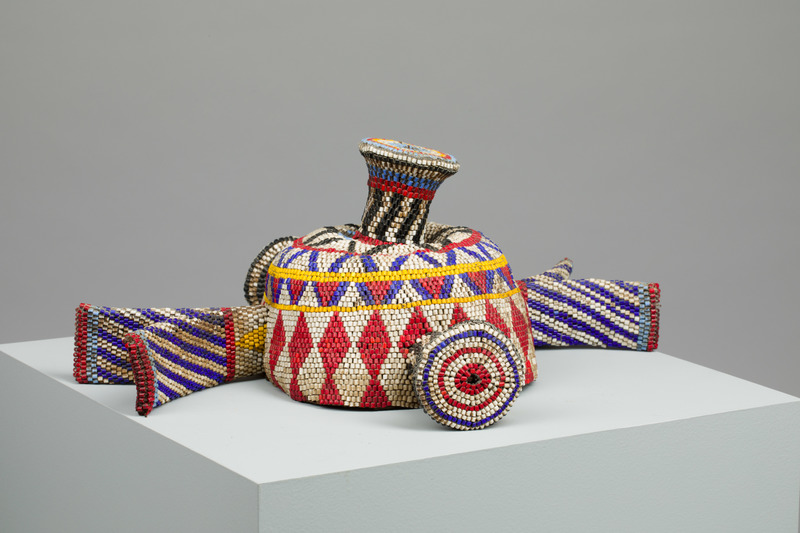 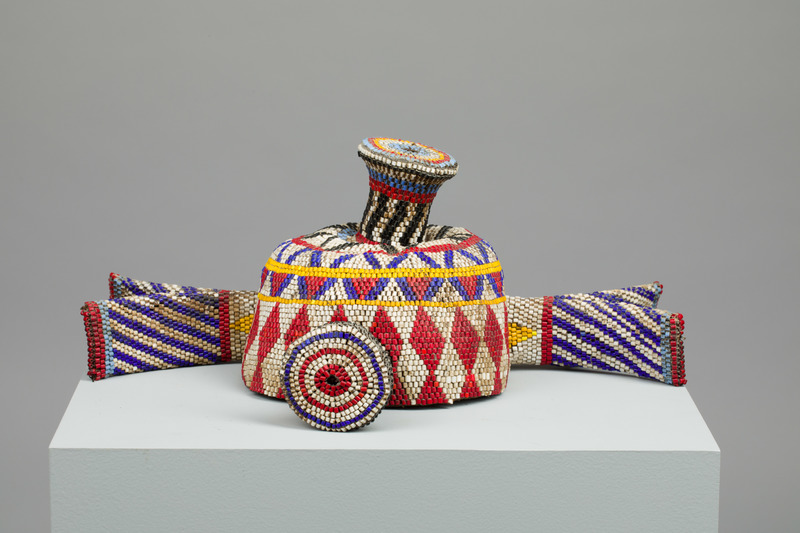 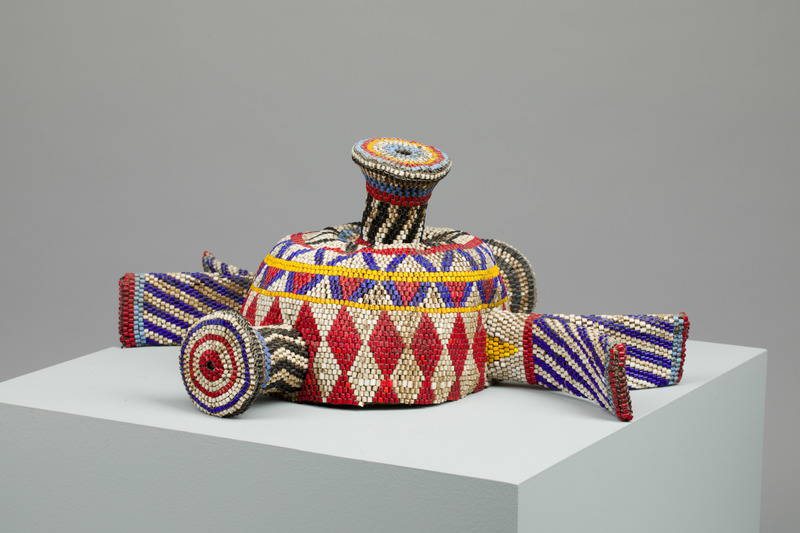 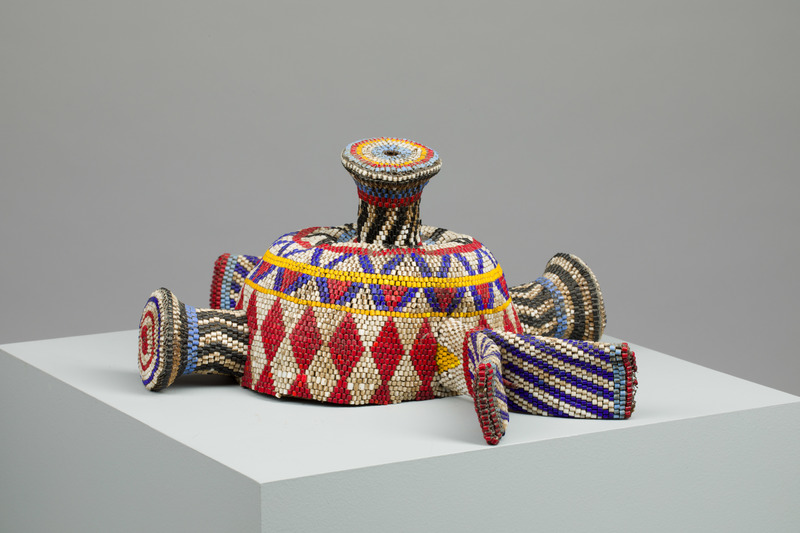 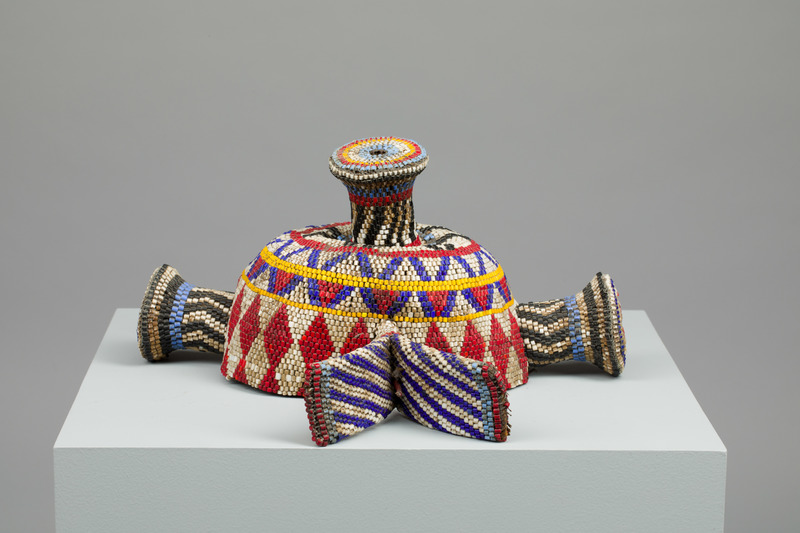 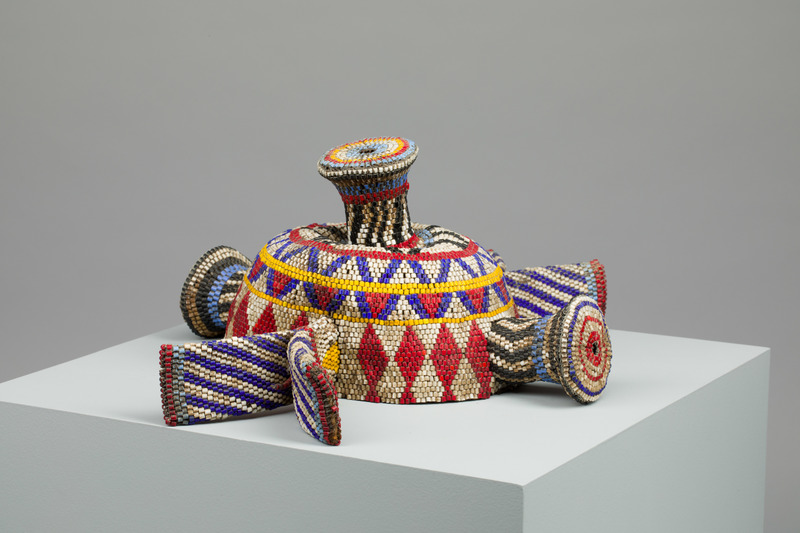 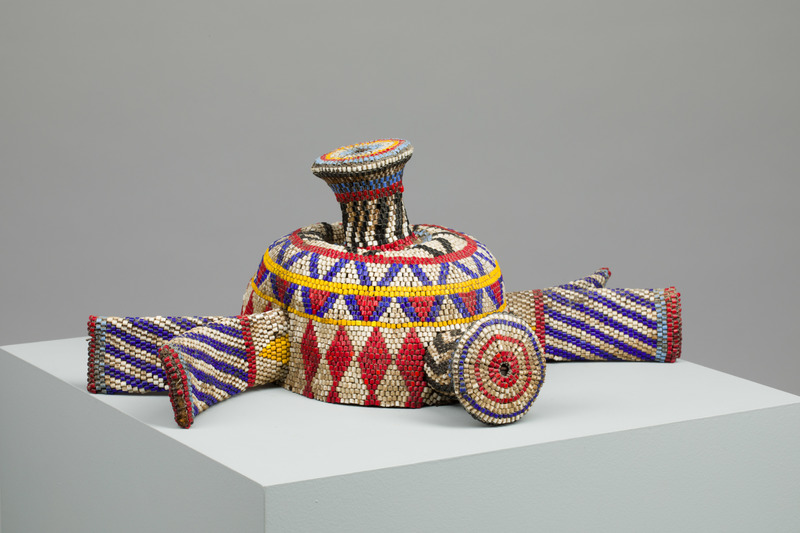 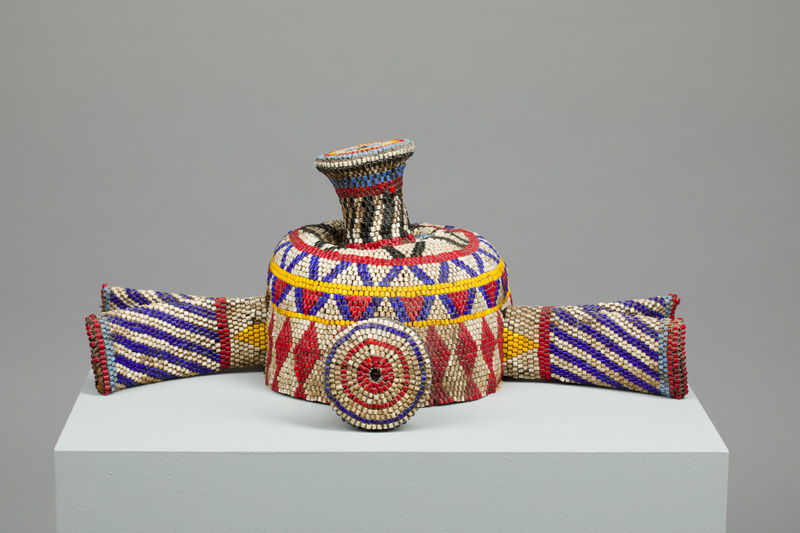 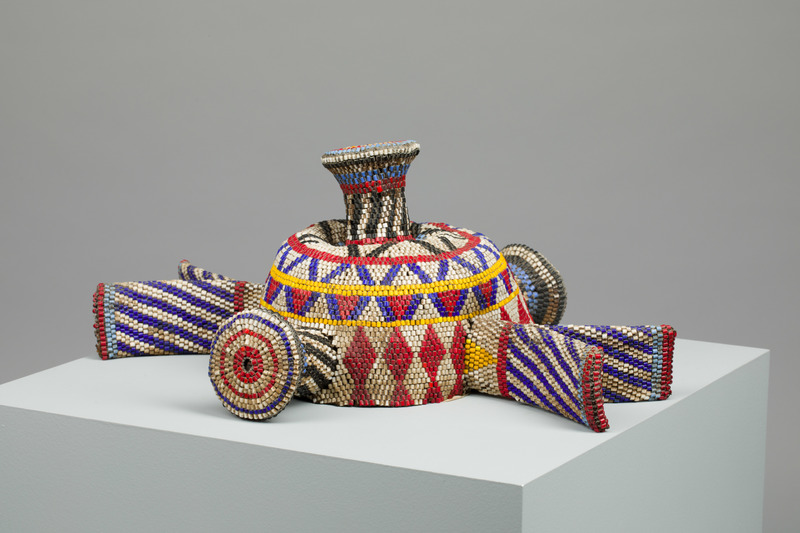 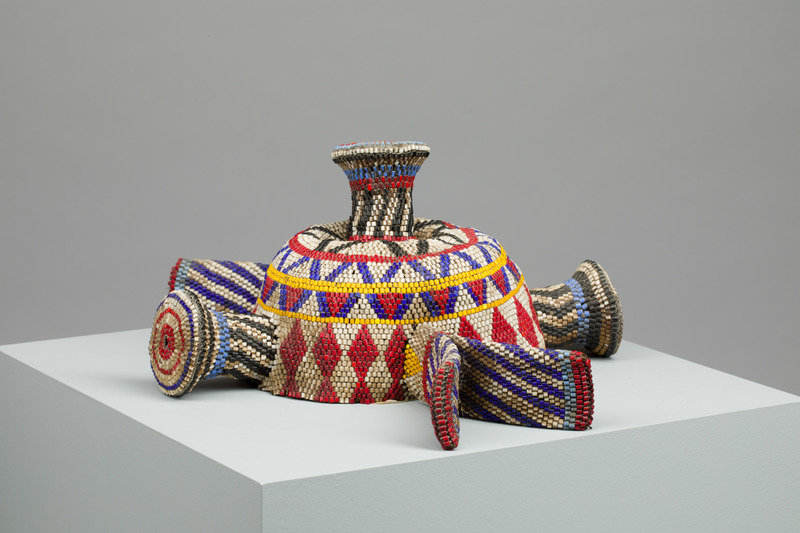 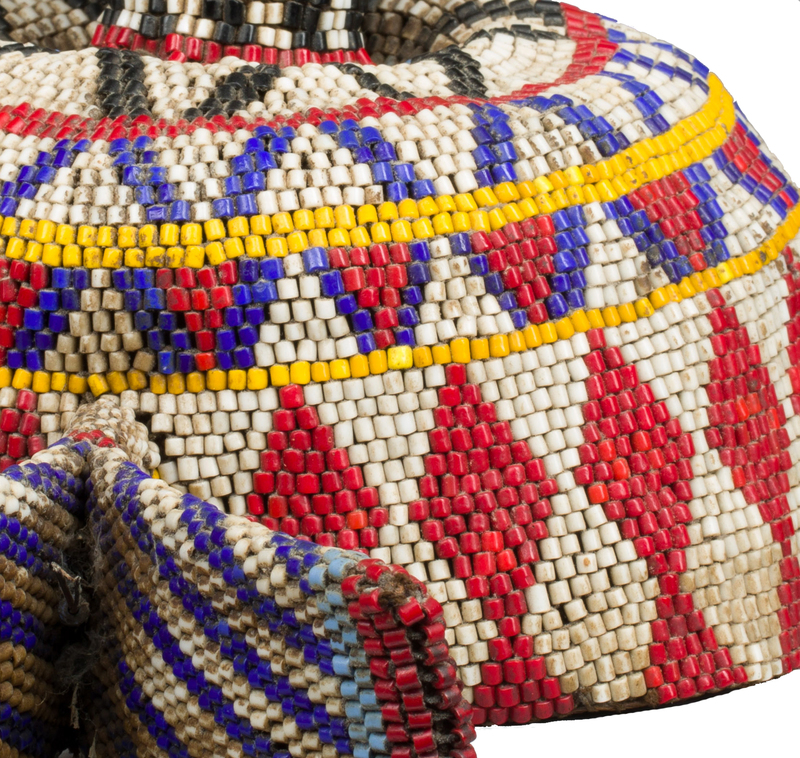 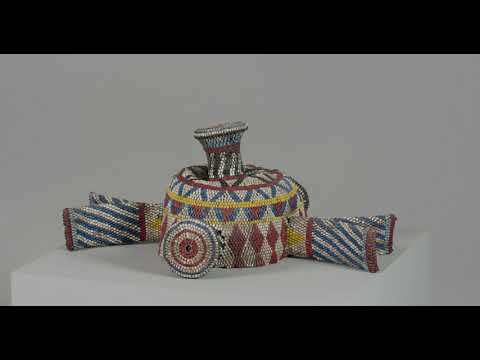 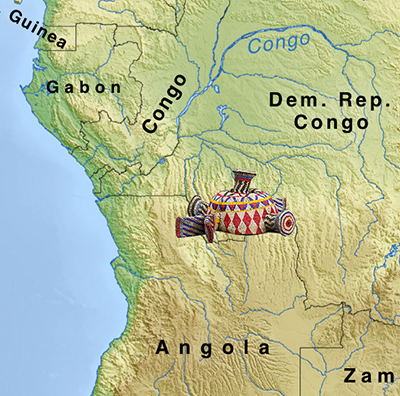