This textile design, ntshakakot, with its plush black embroidered designs and undulating borders, is highly valued. Women of the royal household drape these ornamental textiles around their bodies as special wrappers when they participate in major celebrations and royal displays. This type of skirt may not be purchased and is either inherited, made by a woman and her female relatives, or received as a form of compensation, as in a legal settlement. The ruffling wave along the edges is formed when the threads of the cloth are arranged and bound over a curled rattan stick (Adams 1978, 30–31; Cornet 1982, 195; Burgunder 2004, 204).

Torday tells us that men carry the knowledge and lore of woodcarving traditions, but women are known as the experts in textile and pattern design and hand down the names and pattern techniques (Adams 1978, 34; Cornet 1971, 144–45). An object surface fully covered with a playful variety of geometric elements is a hallmark of Kuba woodcarving, and most designs are inspired by the inventive weaving patterns (Binkley and Darish 2009, 21–22). New patterns are created by anyone who embroiders and sews them on textiles. Kings who are artistically inclined create their own royal patterns to decorate royal objects (Washburn 1990, 24).

According to oral histories, nineteen chiefdoms of diverse ethnic mixes were united under the Kuba king in the seventeenth century. This led to a complex hierarchical system of patronage in the kingdom, with constant competition for power and rank between many levels of titleholders. Most utilitarian objects are adorned and ornamented as a way to display prestige, as royals and noble titleholders throughout the diverse chiefdoms of the Kuba kingdom are the main patrons of the arts. Vansina relates that the Kuba were “intoxicated with organization, and above all with public honors, insignia, and pageantry. . . . Each title had its praise name, emblems, and symbols” (Vansina 1978, 132).

Among the Kuba, an individual’s status is based upon the possession of a title and clan affiliation. Artists draw from imagery that relates to both in their designs for this type of prestige object, which is displayed in a patron’s effort to further elevate the importance of his title and position (Cameron 1994, 125).  Royal figures sponsor extravagant events and celebrations, executed to elevate their prestige and glorify their reign, and elaborate displays of embroidered and decorated textiles are a major part of this (Cornet 1982, 194, 272). Historian Jan Vansina witnessed a brilliant tableau when he attended such an itul festival in the 1950s. He describes the scene as the Bushong king entered the palace with his multitude of officials: “It was a magnificent spectacle, there were more than a hundred of them in full costume. One saw only baldrics and collars, covered with beads and shells, veloured and embroidered cloths, ornaments of metal glittering in the sun, headdresses surmounted with bundles of multi-colored feathers, a meter in height, and waving in the breeze. Each held in his hand the insignia of office” (Vansina 1964, 124).

Darish, Patricia. 1989. “Dressing for the Next Life: Raffia Textile Production and Use among the Kuba of Zaire.” In Cloth and Human Experience, edited by Annette B. Weiner and Jane Schneider, 117–40. Washington, DC: Smithsonian Institution Press.

———. 1978. The Children of Woot: A History of the Kuba Peoples. Madison: University of Wisconsin Press. 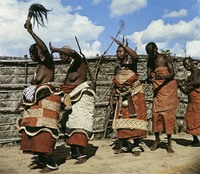 Dance of women of the royal court. 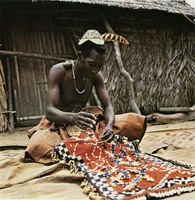 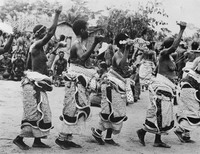