Yoruba peoples living in southwestern Nigeria have among the highest incidences of twin births in the world (45/1000 births). As a result, twins are regarded as extraordinary beings who are protected by the powerful orisa Sango, the deity of thunder. They are often called “children of thunder.” The birth of twins is an occasion to celebrate, but it is also cause for concern because twins have powers to bring benefits to those who honor them properly and misfortune to those who neglect or offend them.

During the period that the figure is being carved, the mother sends gifts of food to the artist, and will present additional gifts when the carving is completed. When the figure is completed, the carver carries out a series of rituals to ready the figure to receive the spirit of the deceased twin. The mother then carries the ere ibeji home on her back, as if it were a living child, and women greet her along the way singing songs of praise for twins.

At home, the ere ibeji is placed on a small shrine in the mother’s sleeping room, its face is washed, and it is dressed in rich garments and beads. The figure may be fed the favorite foods of twins, beans and palm oil. The body is rubbed with red camwood powder mixed with oil and the hair with dark indigo dye. It may be put to bed at night with a blanket to keep it warm in the cold season. If cared and tended, the spirit of the deceased infant may bring its parents wealth and good luck.

It is noteworthy that all the ere ibeje figures are depicted as adults in the prime of their lives. The breasts of the female figure in this pair are full, and the genitals of the male figures are prominently displayed. They stand erect, and their heads constitute a third of the carving and are adorned with elaborate coiffures. The faces are serene and convey a sense of composure and inner strength.

When the mother of twins dies, the figure or figures may be placed in a shrine for Sango, or a surviving twin may take over the care the ere ibeji of his or her deceased sibling, continuing to care for it until his or her own death. In some families the descendants may choose to sell the figure or figures to local art dealers. These carvings then find their way into the international African art market. 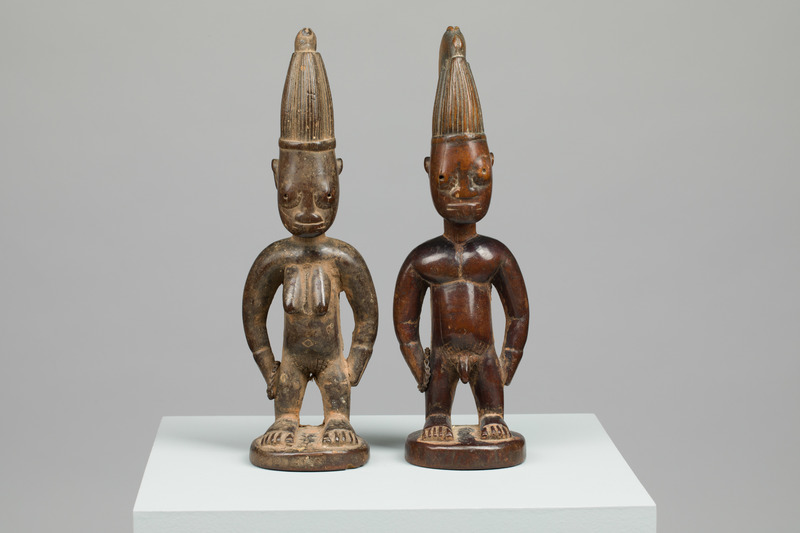 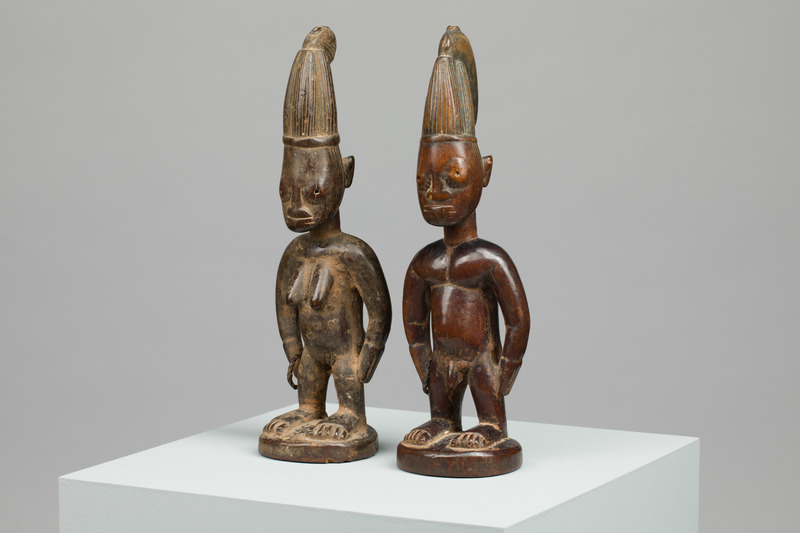 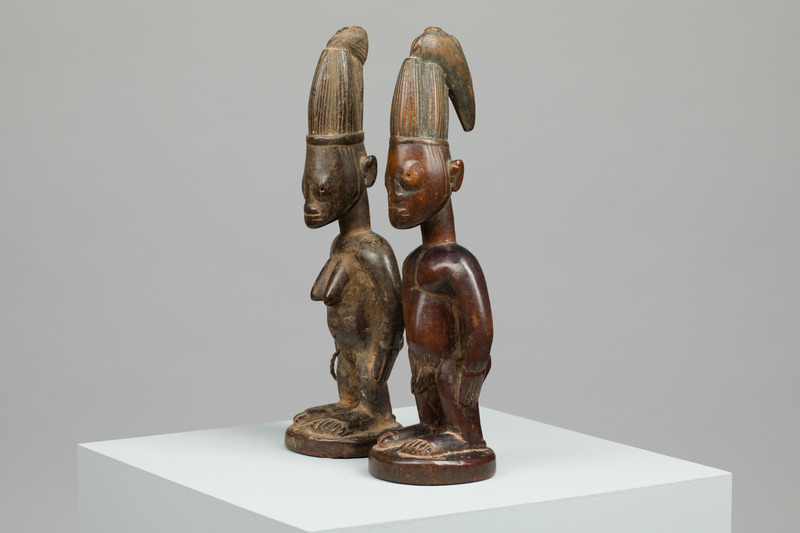 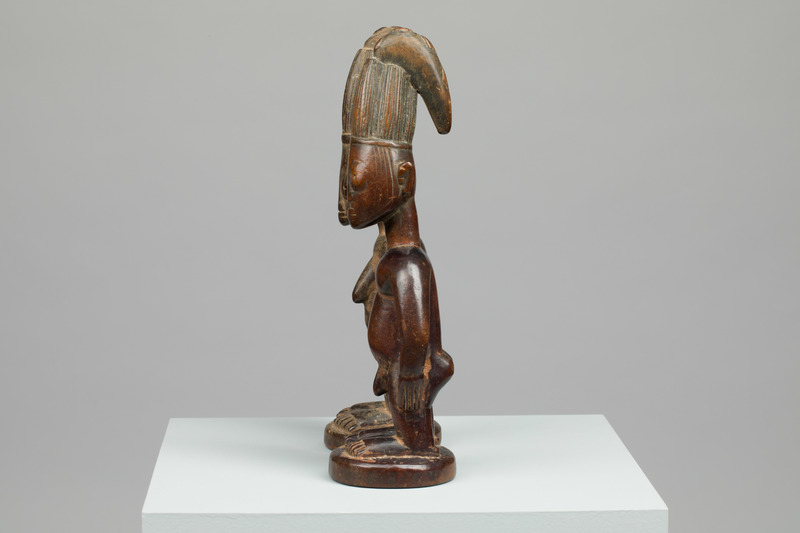 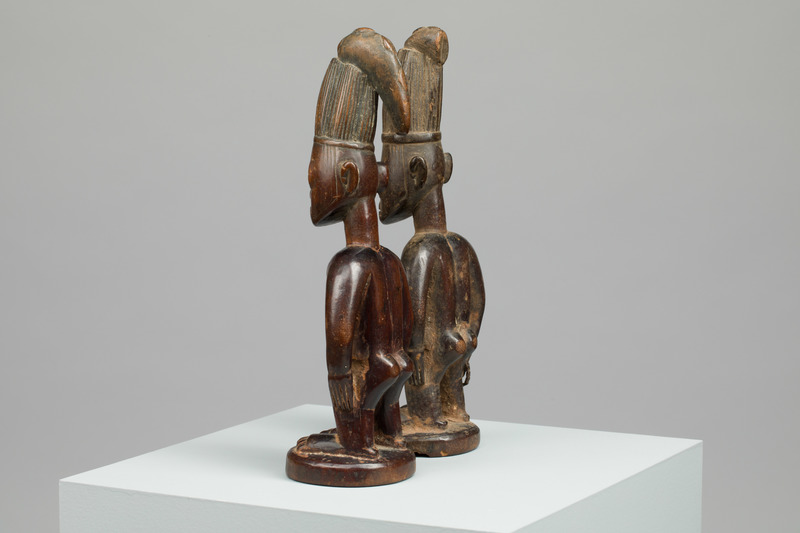 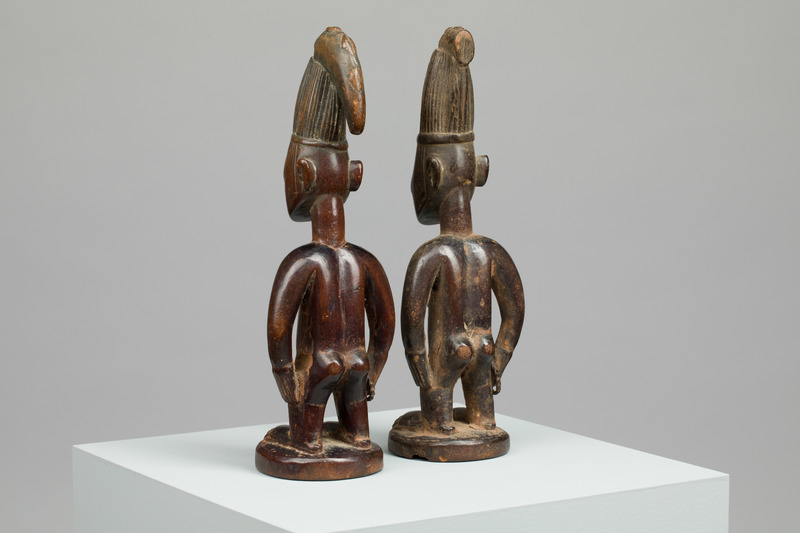 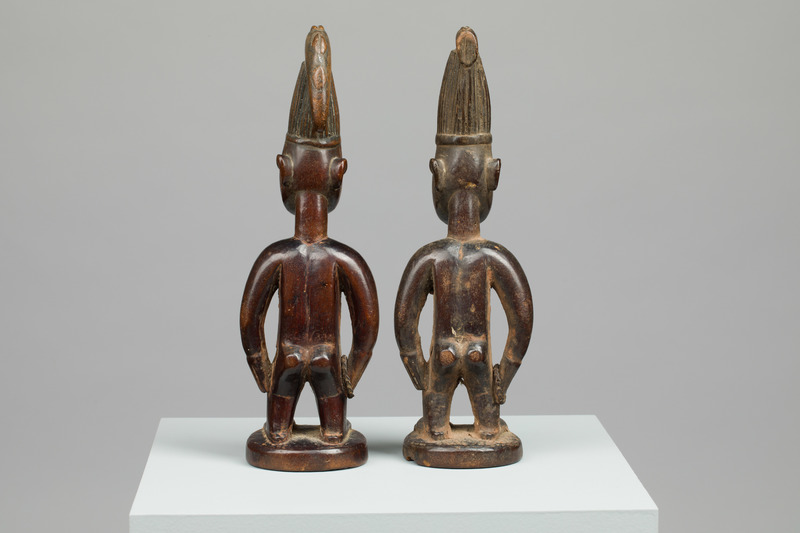 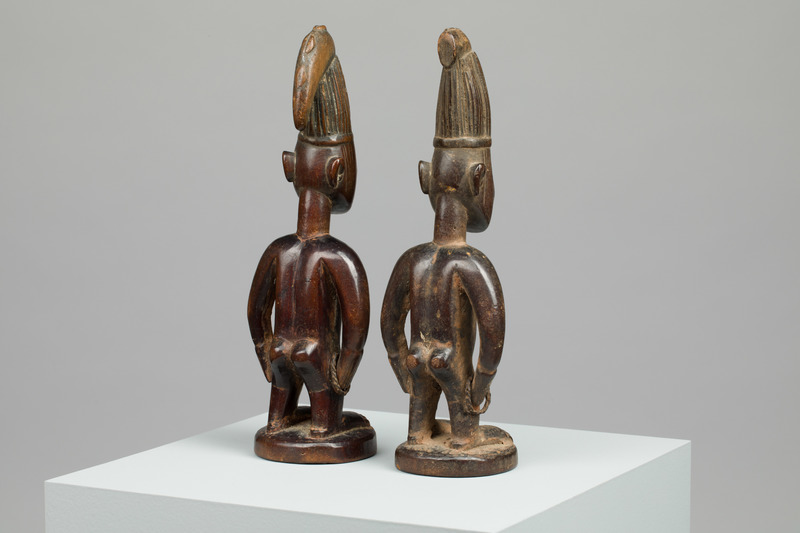 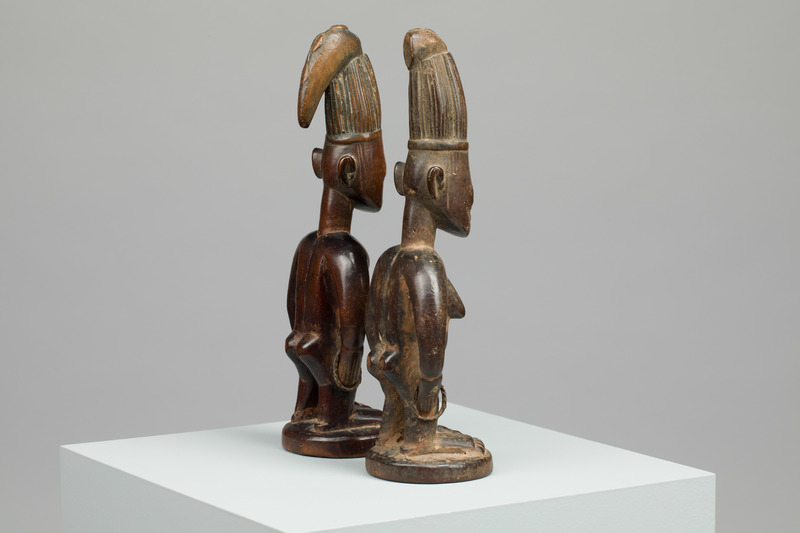 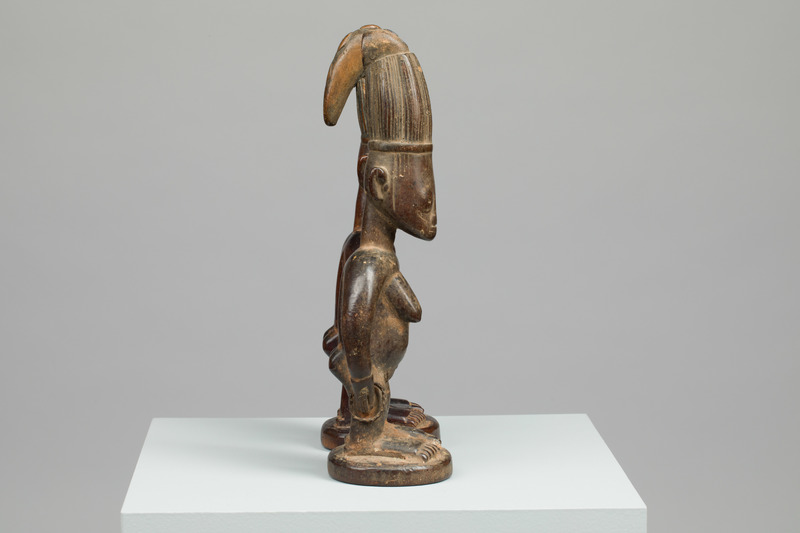 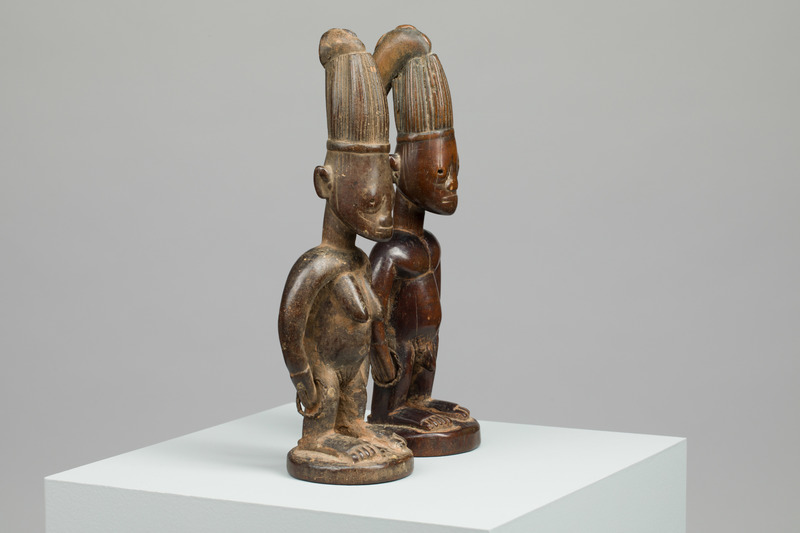 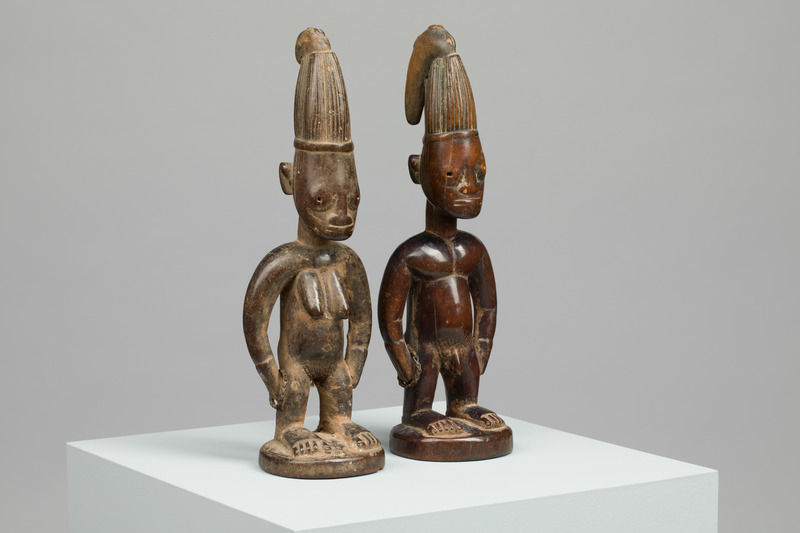 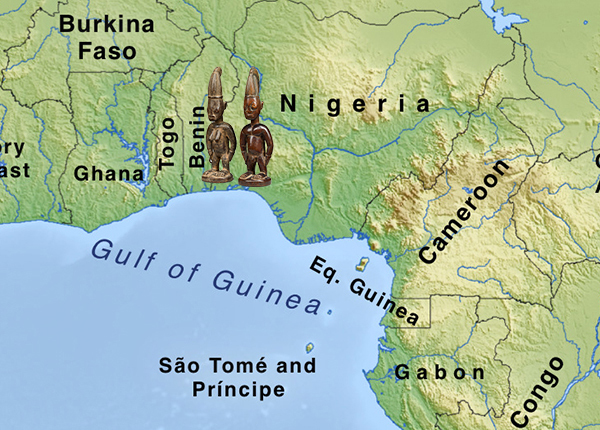 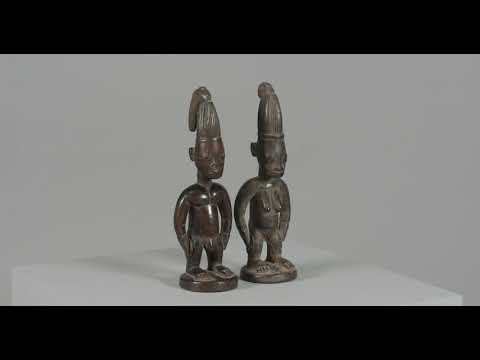