Helmet masks, bundu or sowei among the Bullom (Sherbro) of Liberia and the Mende of Côte d’Ivoire, are performed by senior members of the female Sande society, who are also known as sowei. This Sande society is a multiethnic and transnational association and one of the few where women own and wear masks in Africa. The masquerades embody Sande spirits and play a critical role at each stage in girls’ initiation.

All girls are initiated into Sande at the time of puberty, and they remain members for life. Sande initiation transfers to each generation of girls the knowledge they will need to perform their roles as adult women. Sande teachings include instructions in the duties and the privileges of women. They focus on correct behavior, the care of the body, and practical and artistic skills. Girls are taught about proper relations with husbands and co-wives, sexual behavior, childbirth, and child rearing. They learn the songs and dances of Sande, which they will perform when they are reintroduced as young women to the community. During the three or four months of seclusion in the initiation camp, the bonds formed with other girls of the same age and with older female mentors endure for a lifetime.

The name for the Sande masquerade, ndoli jowei (“dancing sowei”), incorporates several levels of meaning. As a sowei the mask is identified with the wisdom and knowledge of the society's leaders. During initiation, the Sande masqueraders remain with the initiates in their encampment outside the village, entering the town at three specific times to signify that the separate phases of initiation have been successfully completed. Masquerades also perform on public occasions, where they represent the women in the community. Through their skill in dancing, the ndoli jowei attracts the crowd’s admiration and respect. Each chapter of the Sande society is empowered by its possession of hale (medicine), a material substance discovered through dream revelation that must be managed for socially constructive purposes by the Sande leaders. Sande members refer to the masquerade as hale, and as the personification of a Sande society’s medicine power.

This mask reflects the conventions of physical beauty, the high moral ideals of womanhood, and the power of the Sande society. The intricately carved coiffure and the high and broad forehead serve as cultural expressions of female beauty. The eyes are downcast and closed, and the mouth is very small. These features convey moral qualities and ideas of solemnity and contemplation, which is how the new initiates present themselves on their return from seclusion. The mask’s small mouth alludes to one’s ability to keep the secrets of Sande, which are learned throughout the initiation process. It also symbolizes a woman’s ability to live peacefully with others in the community.

While the plump, ringed neck is a feature that reflects ideas of prosperity and health, it also bears a deeper significance for Sande members, as the rings are said to represent the ripples of water from which the Sande spirit arises. The shiny black surface of the mask and the black raffia costume worn during its performance are allusions to the depths of these waters, the homeland of the Sande spirits. On this mask, four horns project from the head, a reference to medicine hale, from which the Sande society draws its power and its standing in the community.

Joseph Vandy Sengeh is a third-year graduate student in the Materials Science and Engineering department at Penn State. He was born in Pujehun town, in the southern part of Sierra Leone. He speaks about Sowei masks and Nomoli figures in this interview with Elyan Hill. Filmed by Cody Goddard. Visit African Voices for more interviews about objects in the exhibition. 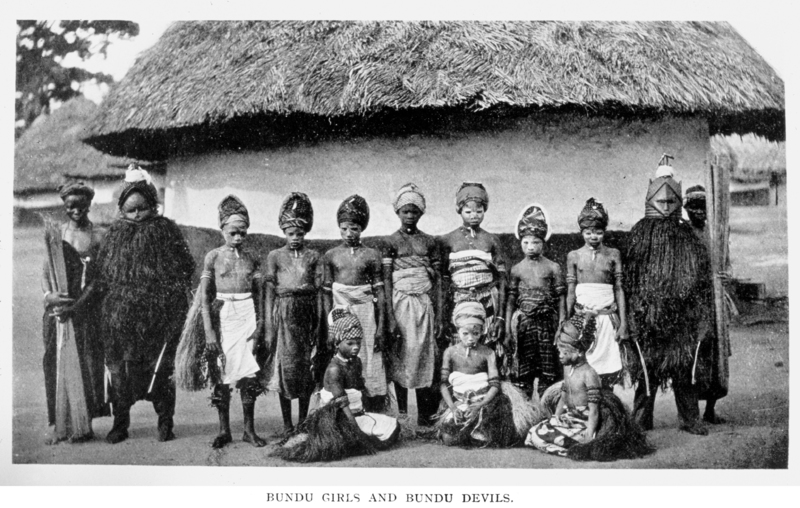 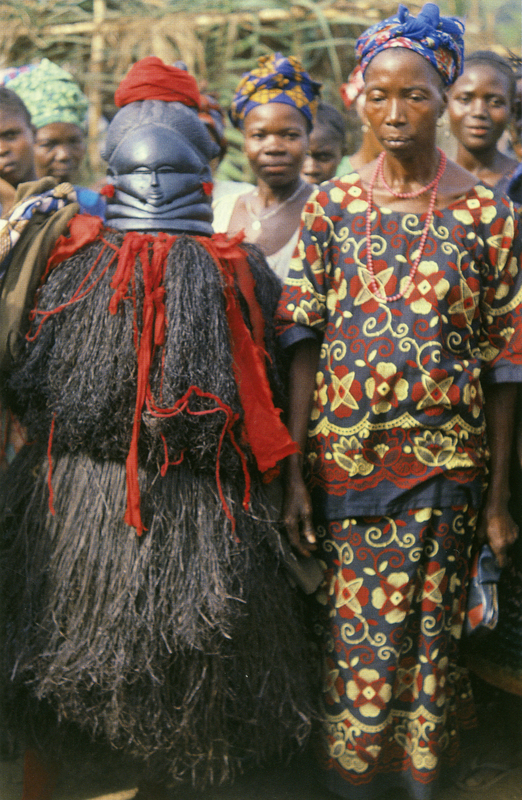 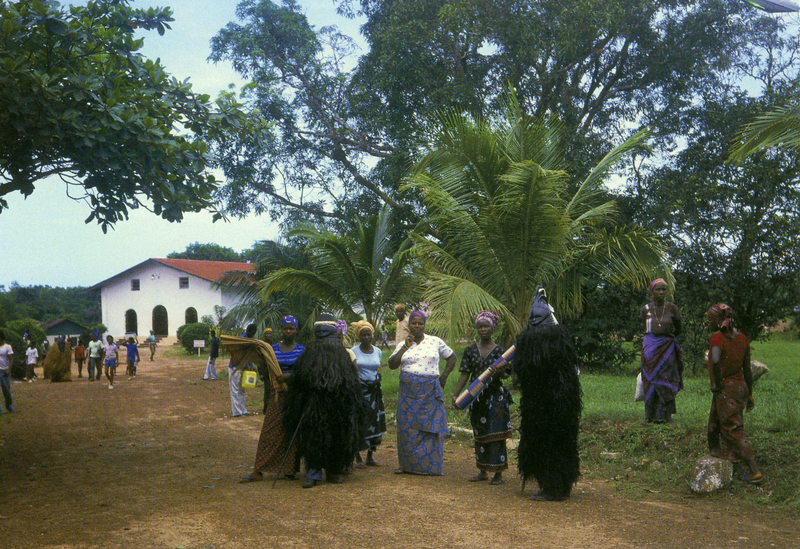 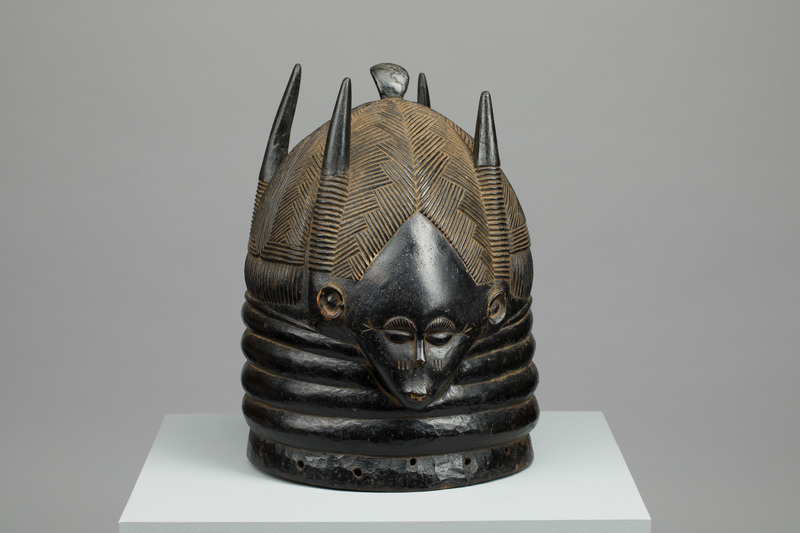 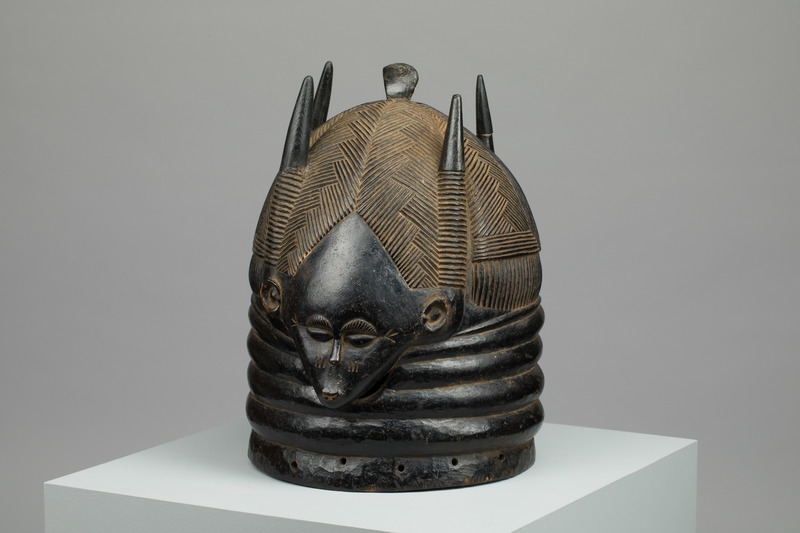 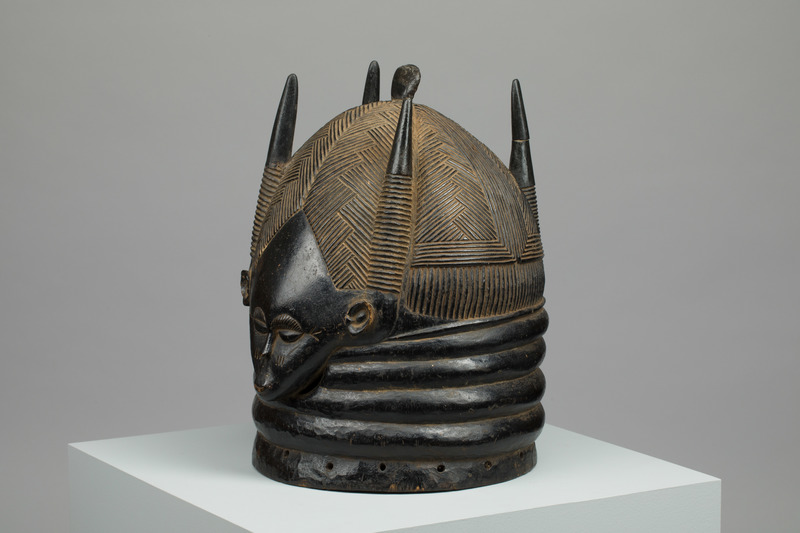 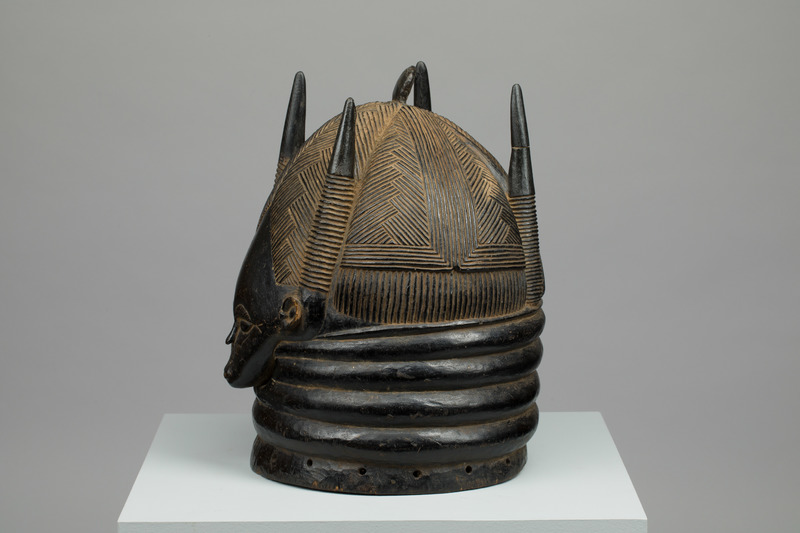 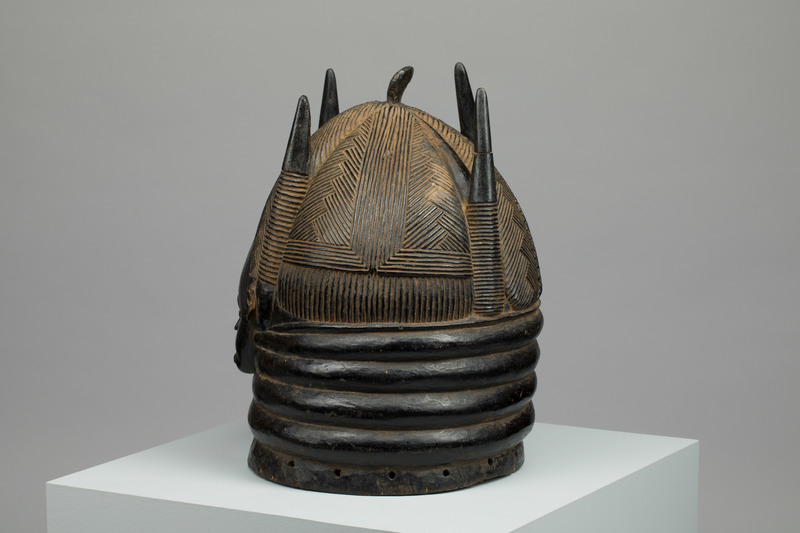 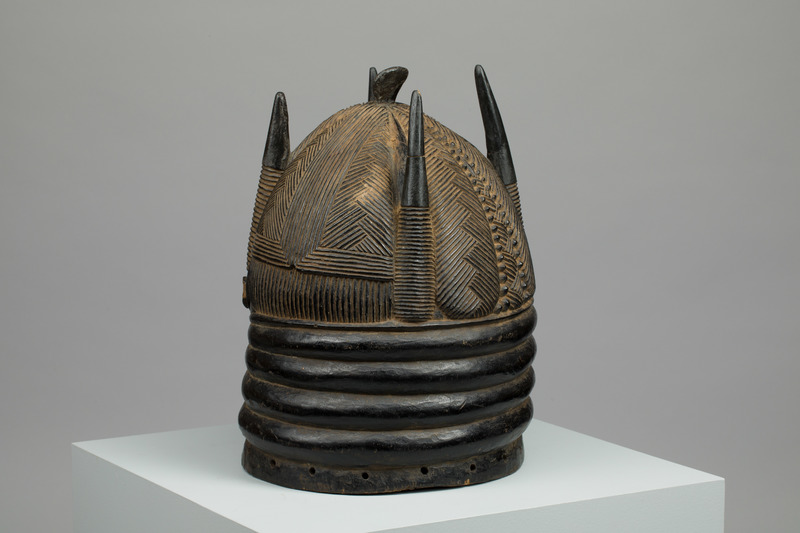 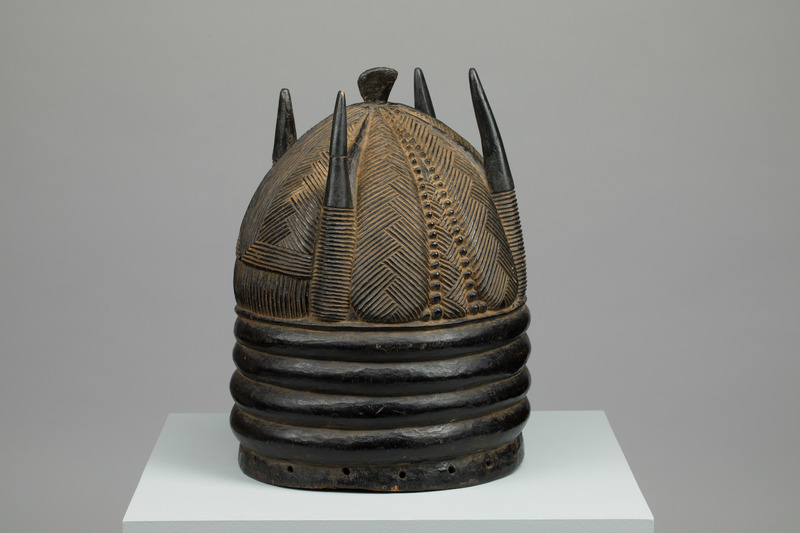 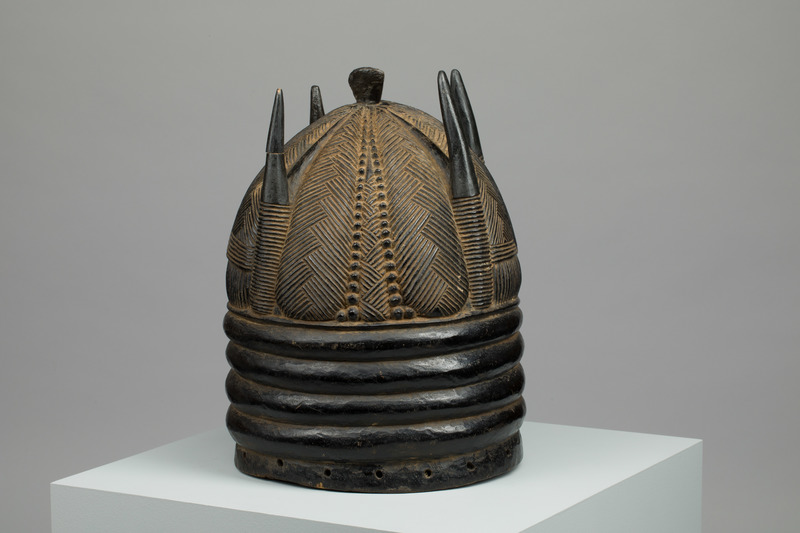 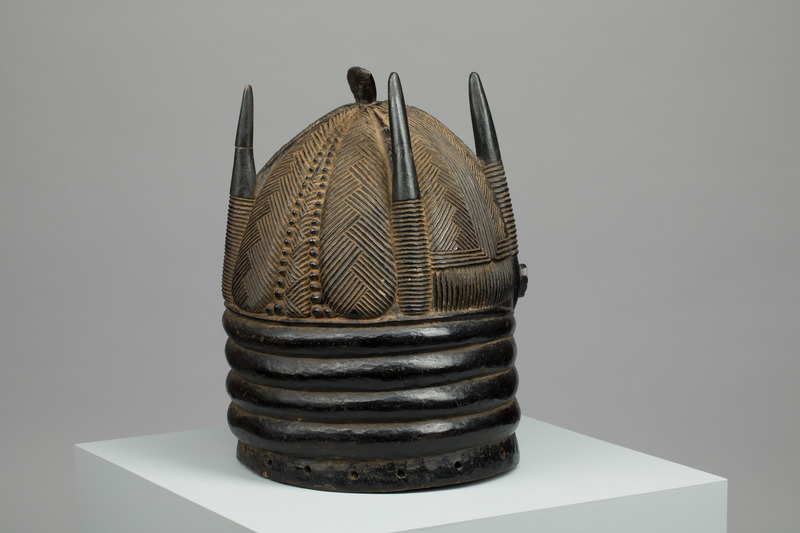 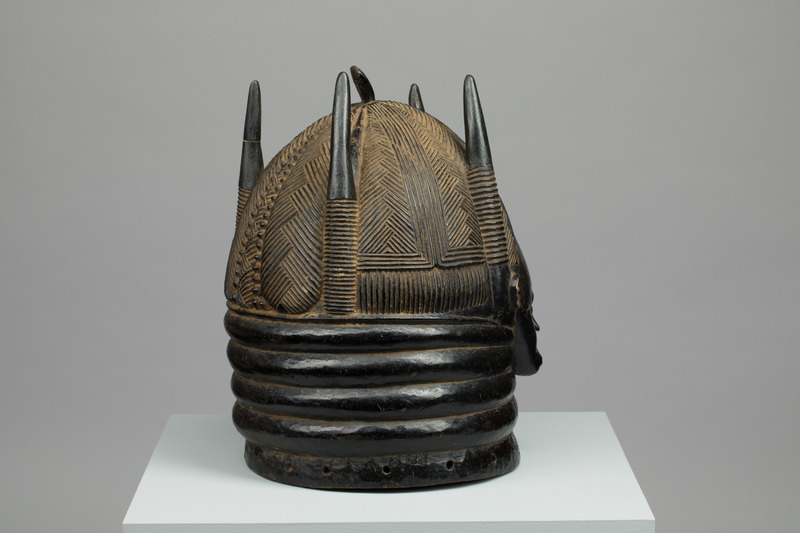 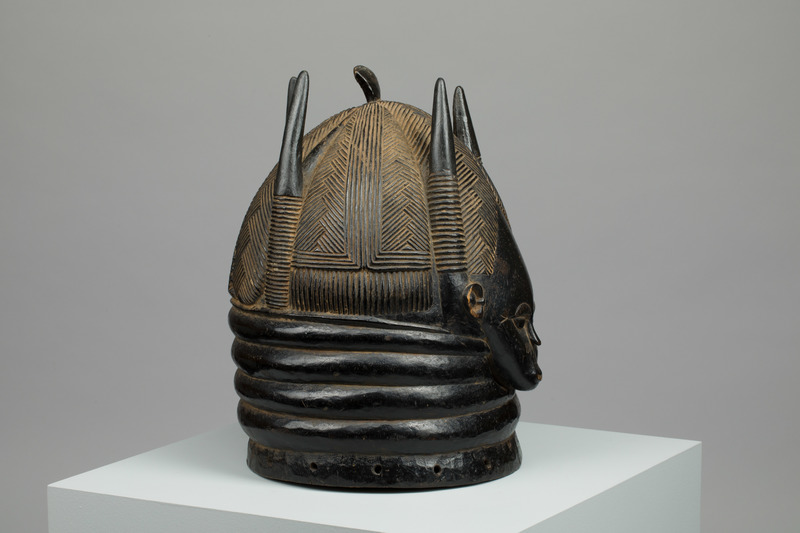 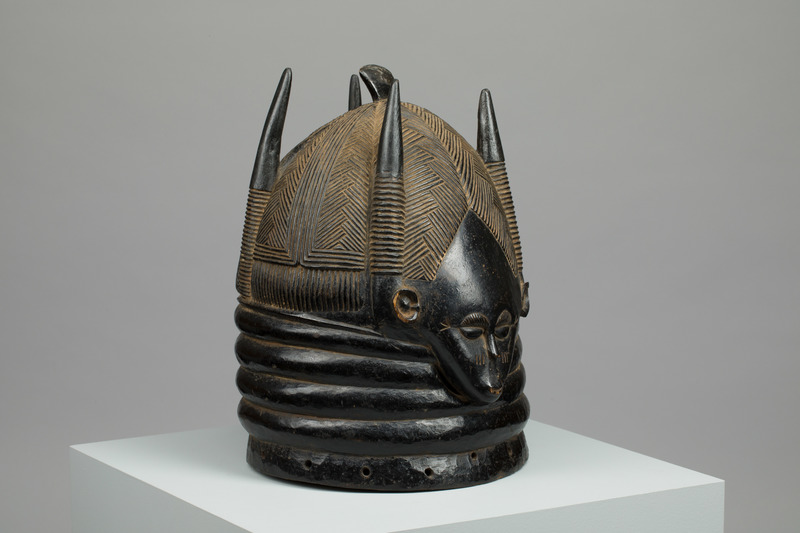 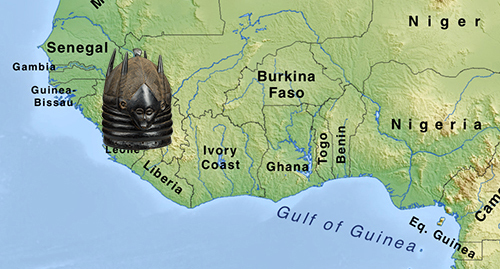 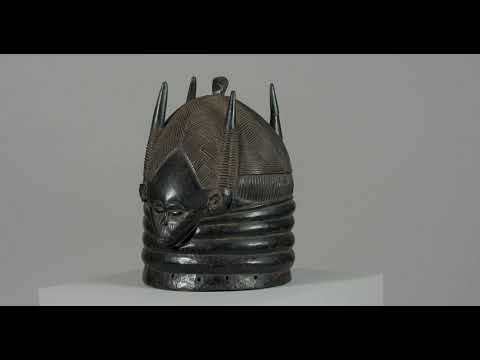