Among the Akan, wooden stools have both daily and ceremonial uses. Stools are found in every household, and anyone may own one or more stools. Stools are associated with rites of passage. When a child begins to crawl, the father gives the child a stool to denotes the continuity of life. During the female puberty rite, bra goro, a girl is placed ceremoniously on a stool, signifying her change of status from girl to woman. When a bridegroom presents a stool to his new wife, it symbolizes marital permanency. At the death of a king, royals, or honored individuals, the deceased’s soul is transferred to his personal stool. The stool is then blackened and consecrated and kept in a special shrine called a “stool room,” where it materially represents the ancestor.

The stool is above all a powerful political symbol. Stools are the central symbol of every Akan chiefdom. Whether they are made for royals or commoners, elaborately or minimally decorated, every stool alludes to the Golden Stool, Sika Dwa Kofi, “the golden stool born on Friday,” and by extension they are the symbol of the state. The Golden Stool is a gold-leaf stool that is kept in the Asante king’s royal treasury. Oral traditions state that it came into existence around 1700 during the reign of the Osei Tutu, the founder of the Asante Confederation. It embodies the soul of the nation and the political unity of the Akan states. It is so spiritually powerful that it is carried by royal stool bearers during ceremonial processions. It is never sat upon, and when it is displayed it sits upon its own chair.

All stools have the same basic form, but often feature variations in the central support and ornamentation. This stool is carved from a single piece of wood and consists of a rectangular base. A central post with carved openwork and four corner posts rise from the base to support a saddle-shaped seat. Chiefs’ stools are larger, often elaborately carved, and many have silver repoussé work as added decoration. Because this stool is of an average size and does not have metal decorations, it was probably intended as a household stool. Whether a stool for a chief or a commoner, an individual’s personal stool is so intimately associated with his or her spirit that only the owner would sit on it. When not in use it would be tipped on its side.

Clemente Abrokwaa is an associate teaching professor in the African Studies Program at Penn State. He speaks about Asante stools and goldweights in this interview by Elyan Hill. Filmed by Cody Goddard. Visit African Voices for more interviews about objects in the exhibition. 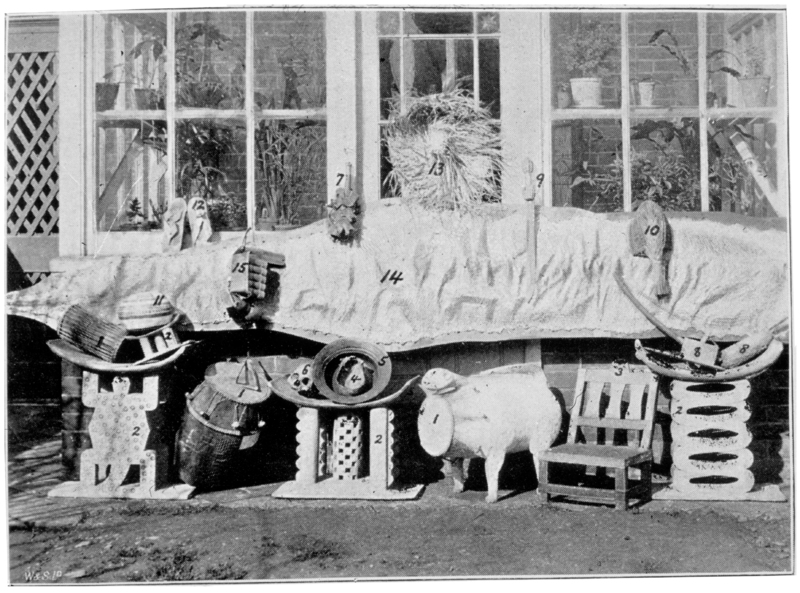 Image of various stools and artifacts. 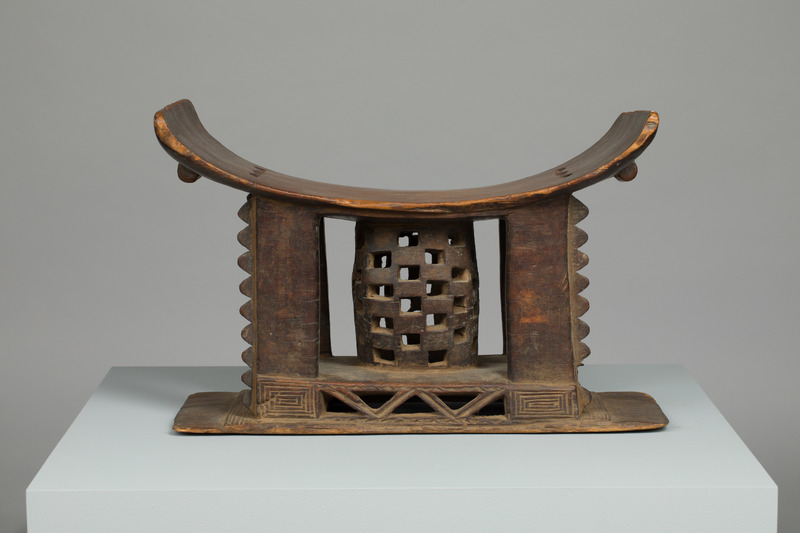 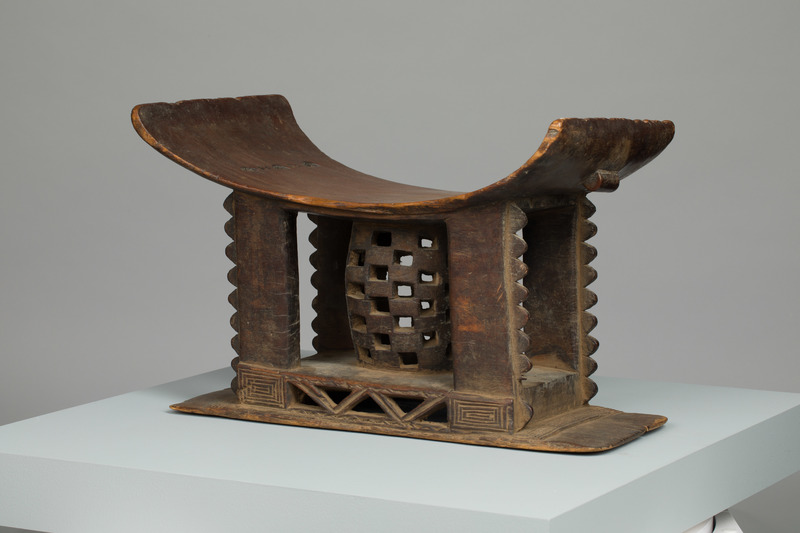 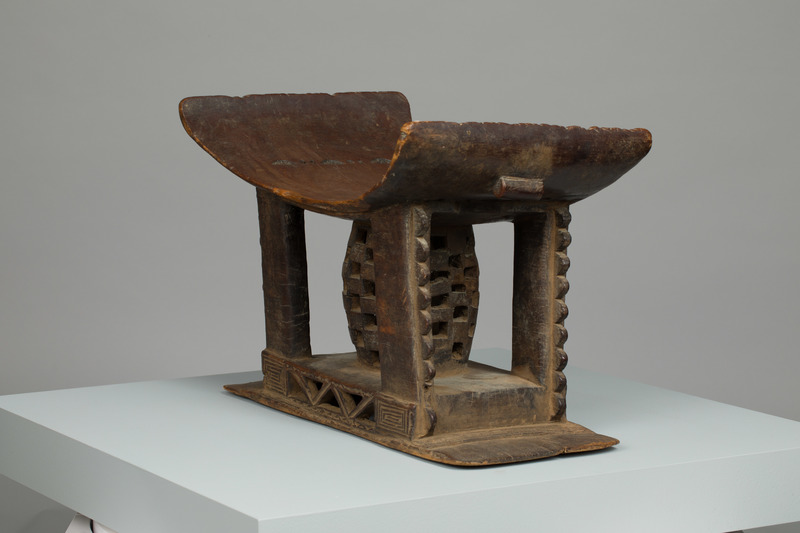 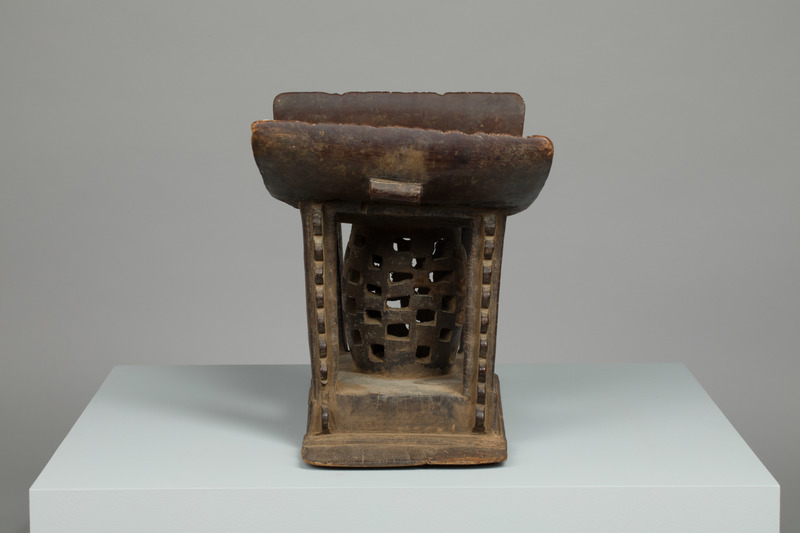 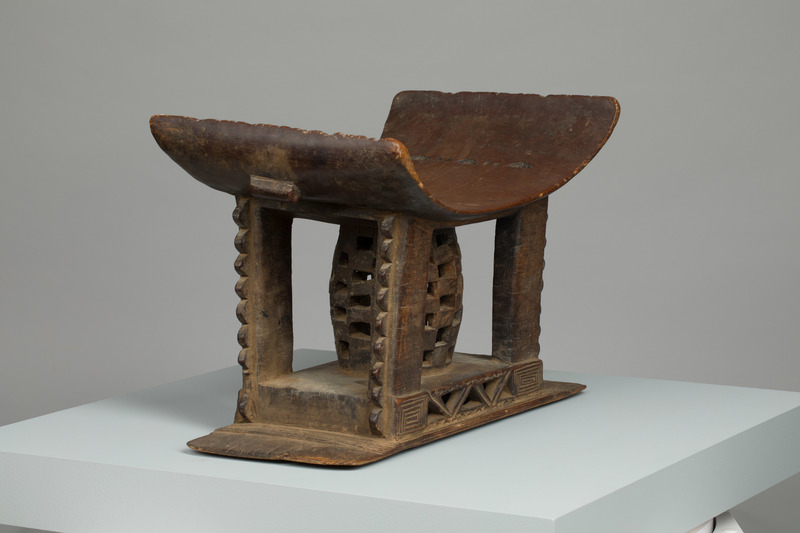 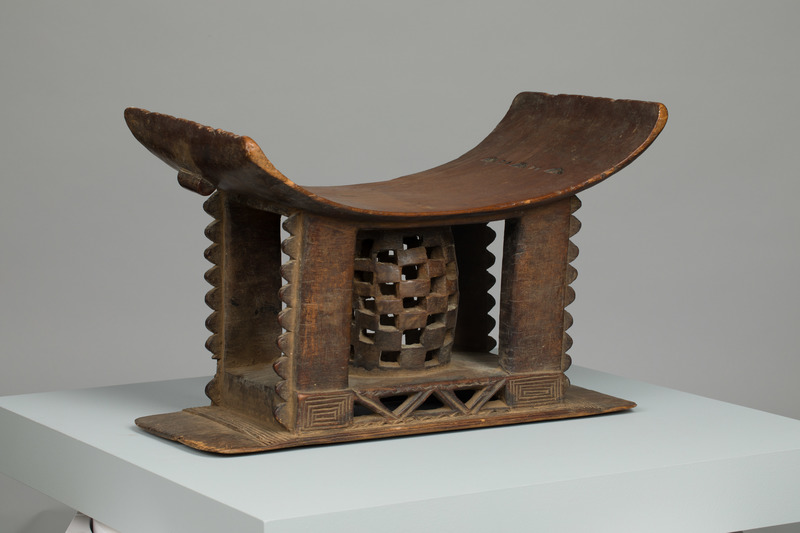 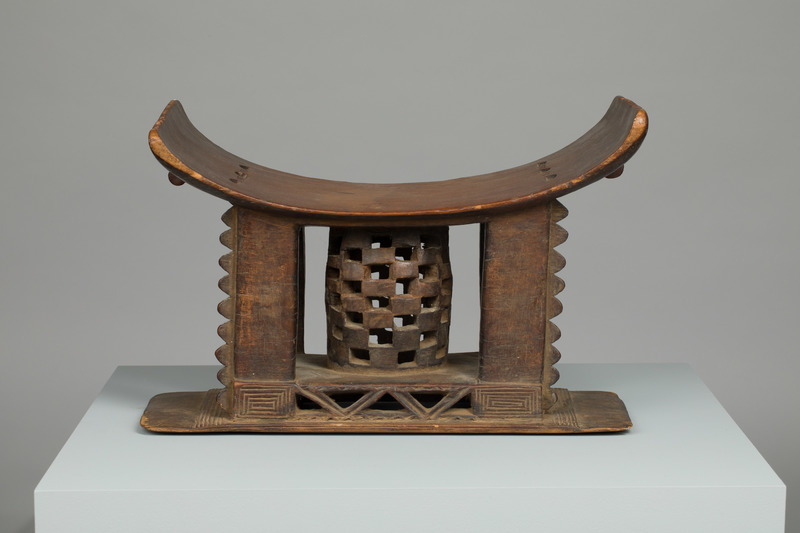 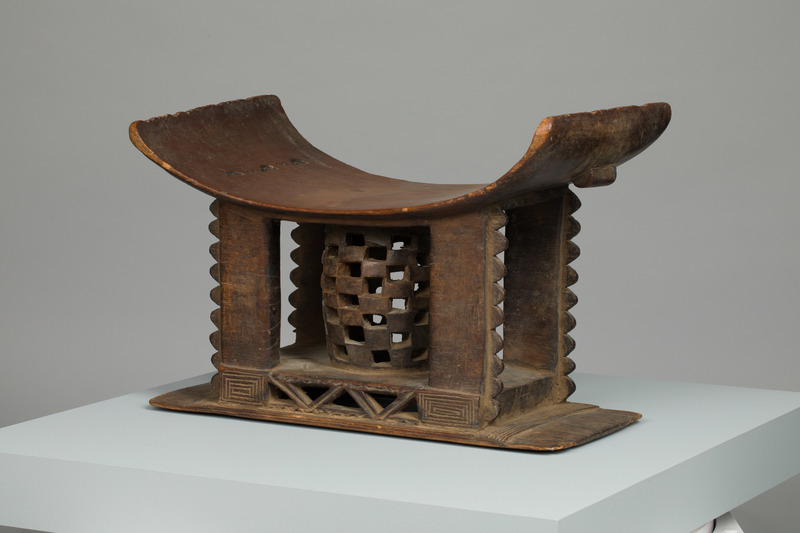 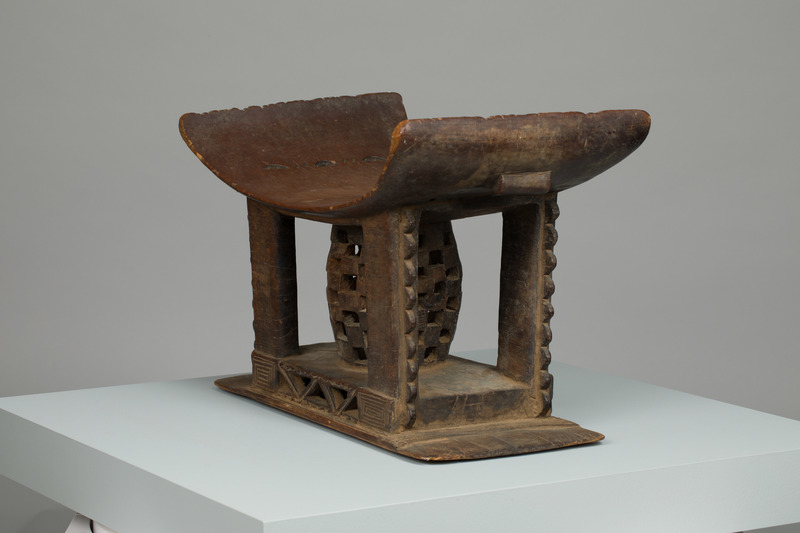 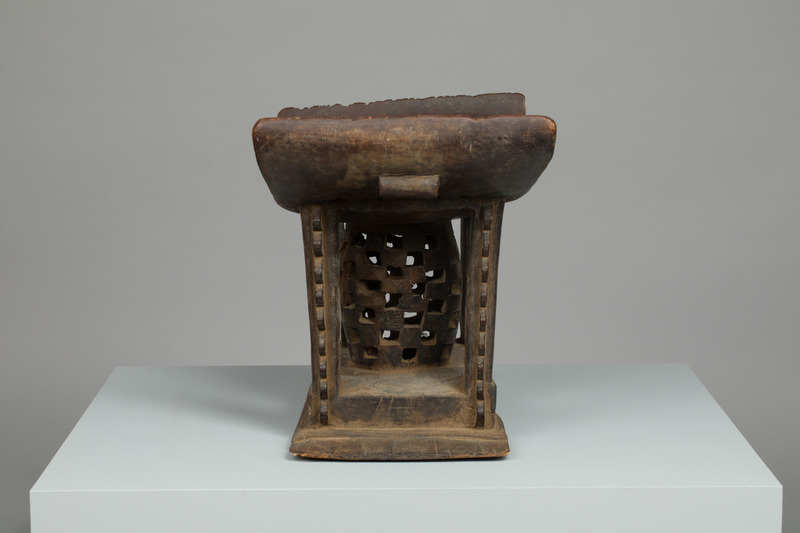 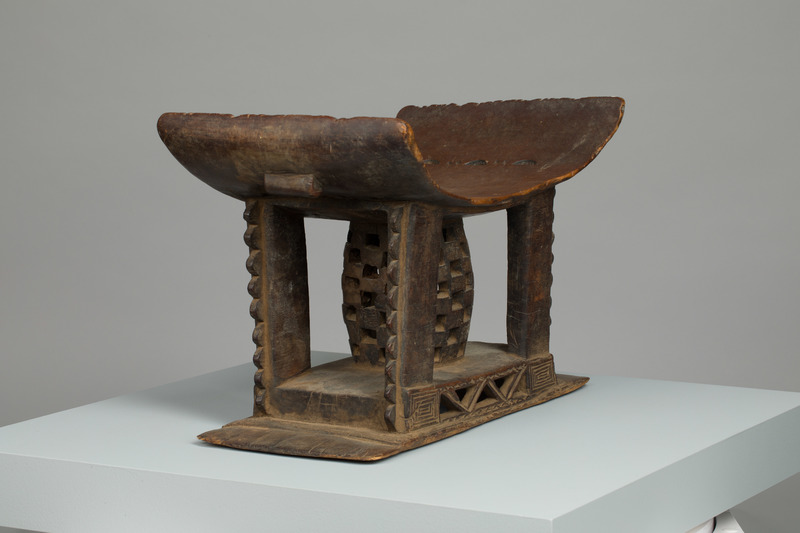 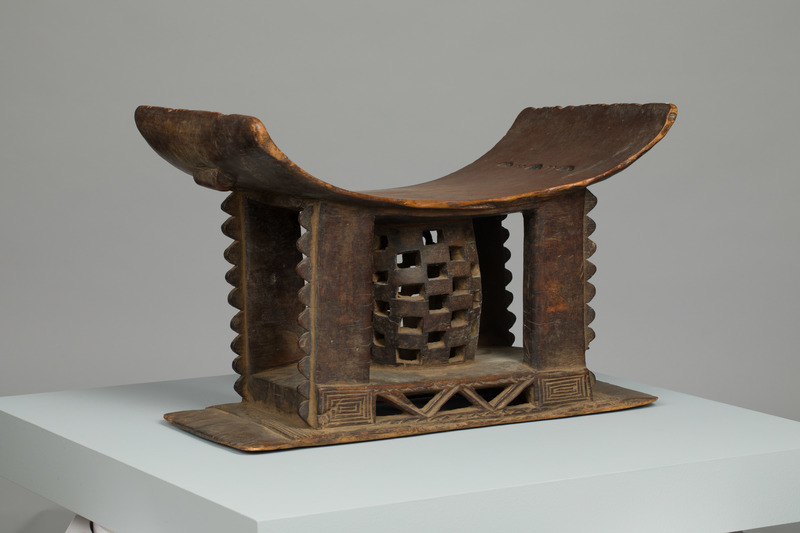 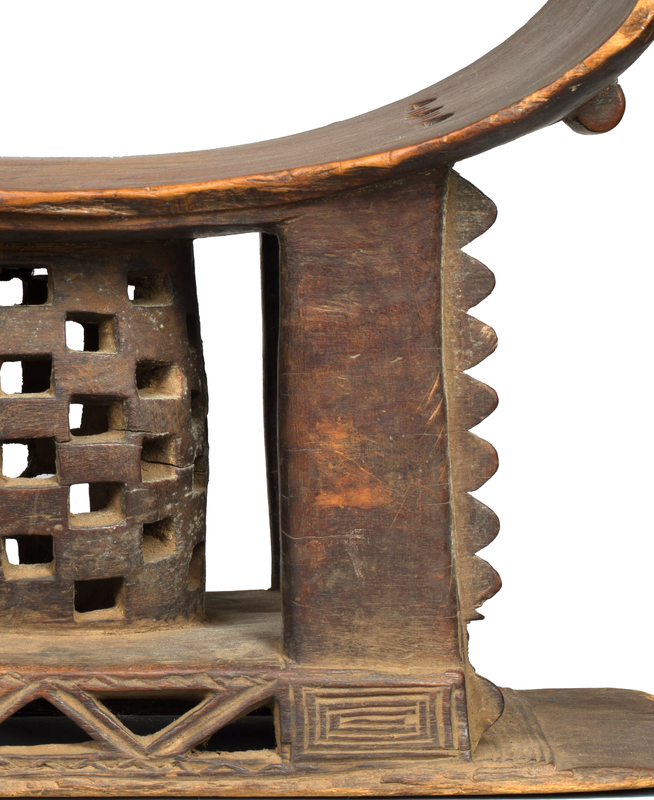 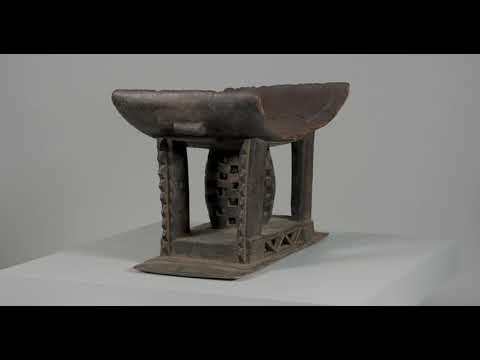